Spotlight on health at Yornight 2015 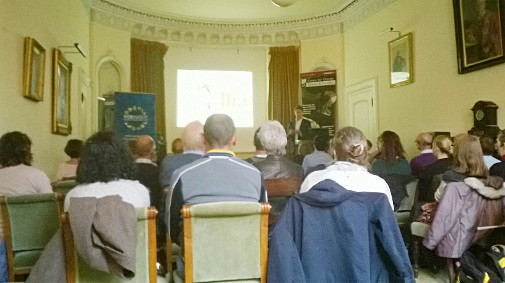 The City of York's historic and beautiful Medical Society, tucked away down an alley off Stonegate close to the Minster, was the location for a series of short talks about some of the most innovative and impactful research taking place in the City. Subjects ranged from the unexpected variety of blood cancers and malignancies to trialling new ways of correcting for 'lazy-eye' using video-game technology, and from improving mental health through participation in the arts to a new method being developed of killing prostate cancer with cold plasmas. There were also three very engaging talks about bacteria and their relationship to us which also introduced some innovative ways, drawing on research in biochemistry to economics, of tackling the increasing problem of antimicrobrial resistance.

Above all the talks demonstrated that, though rarely any golden bullet can be found for a health disorder, the best chance of finding the most effective remedy is by looking at the problem from a whole range of disciplinary angles and situating the research within a whole range of contexts: socio-political, environmental and economic.

The talks were given by individuals at different stages of their research career from a final year PhD student to a senior Professor and Chair and were really well received by the full-capacity audience. The audience also enjoyed the chance to ask questions at the end of each talk and then chat more informally to the researchers over a drink during the intervals.

It is the second year running that York has been one of the 280 cities across Europe and beyond to play host to the European Researchers' Night. This annual 'mega' event is sponsored by the EU and was initiated ten years ago to offer the public a unique opportunity to meet researchers and take part in science activities aiming to showcase both the fascination of research as a career and its significant societal impact.

More information about the talks given is on the Yornight website