With a growing number of visitors each year, it seems that the appetite of the York public for health and science knows no bounds 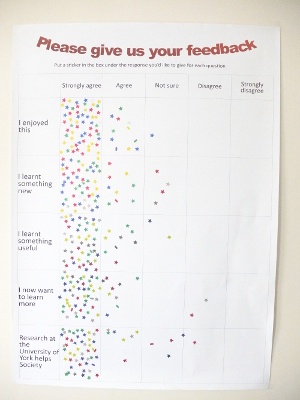 This year ‘Science out of the Lab’ was held over two days, Friday 13th June and Saturday 14th June, and received over 850 visitors on the Saturday - the biggest attendance yet! The visitors were asked to provide feedback on their enjoyment of the activities, what they had learnt and their impressions of the value of research and outreach being undertaken by the University. This feedback was captured on a specially designed poster where each individual was able to place a star to indicate how far he/she agreed with a number of statements (see left). It is clear from the density of stars towards the left hand side  that the overwhelming majority were really inspired by the experience and thought York research had true value to society. A number of individual comments were also submitted including: 'A great way to inspire a new generation of scientists' and 'fantastic work going on'.