In July 2022 the Borthwick Institute launched an eight month project to catalogue the records of the Joseph Rowntree Reform Trust (previously the Joseph Rowntree Social Service Trust).  The early part of the Trust’s archive was catalogued in 2018 as part of the Wellcome funded project, ‘The Rowntree Archives: Poverty, Philanthropy and the Birth of Social Science.’  Now, thanks to a generous grant from the JRRT, the records of the Trust from the 1960s onwards will be listed, packaged and added to the online catalogue. 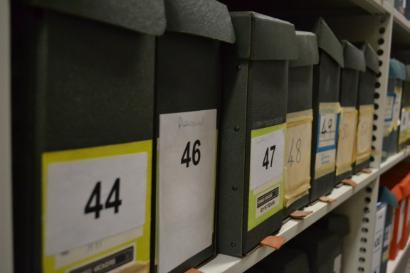 The 1960s represent a watershed in the work of the Trust.  The JRRT was unique among the three main trusts founded by Quaker confectioner, Joseph Rowntree, in 1904.  It was created intentionally as a company, with the freedom to fund non-charitable, and even political work that its sister trusts could not.  From its earliest days it gave significant financial support to the British Liberal Party, as well as funding small liberal newspapers in an effort to counterbalance what it saw as a dominance of right wing media in the regions.  However, until the 1960s much of its work had still been directed towards charitable and non-political causes, including temperance and education, and regular grants towards the pioneering social research of Seebohm Rowntree.

In the 1960s this began to change, as the causes supported by the Trust became more overtly political.  This shift came in part as a reaction to the changing political landscape, as the protest movements of the 1960s emerged and then matured into professional pressure groups and organisations campaigning for change in the UK and abroad.  Since the nature of their activities meant such groups were ineligible for charitable grants, the JRRT became an invaluable source of alternate funding which was not subject to charity law, and could therefore support activities linked to social and political reform.  From the 1960s onwards the JRRT offered funding and office space to campaign groups like Friends of the Earth, the Low Pay Unit and Mothers in Action; it threw its non-inconsiderable weight behind campaigns for constitutional and electoral reform, devolution, press freedom, and civil liberties; and it made grants to liberation movements in Africa and Europe, as well as giving financial support to the long campaign for a permanent peace in Ireland.  Whilst it continued to play a key role in supporting the Liberal Party, it was concerned above all with promoting a healthy parliamentary opposition and as such gave grants to political parties from all sides.  Some of its schemes, such as the ‘Political Fellowship’ scheme of the 1970s which financed assistants for opposition MPs in the House of Commons, were later incorporated into law.

For more than a century the JRRT has, in ways large and small, helped to shape the political and social landscape, but until now the JRRT Archive has only told half of this story.  This project aims to tell the rest, following the Trust through some of its most turbulent decades and opening up the fascinating contents of its archives for research for the first time.

The project will run until February 2023.  If you have any questions please contact the project archivist Sally-Anne Shearn at sally-anne.shearn@york.ac.uk