We were saddened to hear on the 24th July of the loss of our former Head of Conservation Trevor Cooper MBE.

Trevor joined the Borthwick in 1967 as a searchroom assistant, almost immediately receiving training so that he could assist the ‘Document Repairer’, as our conservators were then known. In 1972, Trevor was made Assistant Repairer; and succeeded Doug Willis as Head of Conservation in 1981. Trevor worked at the Borthwick for just short of 42 years, retiring in July 2009. 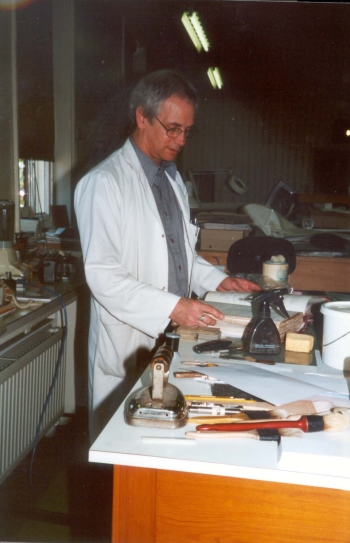 Just a few of his achievements can be found here; but this really just scratches the surface of a hugely successful and influential career. Trevor worked widely with other archive-holding bodies across the City, not least in conserving the ‘King’s Book of York Heroes’ held at York Minster; and in pioneering work using enzyme treatments to conserve the City House Books now held at York Explore. In 1999, as a mark of his skill and expertise, Trevor was awarded the MBE for his services to conservation.

A testament to Trevor's work and craft exists in the thousands of documents and seals he skillfully treated and repaired; the books he rebound; the maps he preserved; and the wills he flattened. Firstly in their physical repair and secondly in the improved stability and accessibility of the documents that resulted from his work, and which continue to afford our researchers access, opportunities and insight into the archives in our care. Knowledge, advice and support was always freely given with good humour - be that to our own staff or the many group visits, tours and events he informed and entertained.

Trevor also contributed widely beyond the Borthwick - he trained many conservators as part of the Society of Archivists Conservation scheme and supervised countless volunteers and Borthwick staff; and undertook innovative hands-on disaster training sessions - one of, if not the first, to do so. This came to the fore in his role in supporting York flood of 2000, a period which brought all of Trevor’s skill, ingenuity and care for archives to the fore.

To say he will be missed by all of us at the Borthwick and in the wider archives profession is an understatement.  Trevor was more than just a colleague - he was a dear friend; a fount of inspiration, invention, creativity and guidance; and, more than anything, an exceptionally gifted conservator.