After another busy week at the Borthwick we are pleased to bring you two new catalogues as well as an update from the university’s Rare Books collections.

After another busy week at the Borthwick we are pleased to bring you two new catalogues as well as an update from the university’s Rare Books collections.

Our two new complete catalogues cover more than 400 years of history and include some 1,414 individual archival descriptions.  If you have been following these updates you will know that the Borthwick holds the archives of many York schools, but did you know we also have the archive of Ripon Grammar School?  Incorporated in 1555 as the Free Grammar School of Queen Mary at Ripon, an earlier form of the school had probably existed in the town since the fourteenth century.  The school’s archive is extensive and includes the original school charter of 1555, as well as records of the school’s teachers and students which can make for some lively reading!  The school received a landed endowment at its incorporation and the archive also includes land holding records for Ripon and the surrounding area that can provide an interesting contrast between the lives of the boarders and masters at the school and those of the local townspeople. 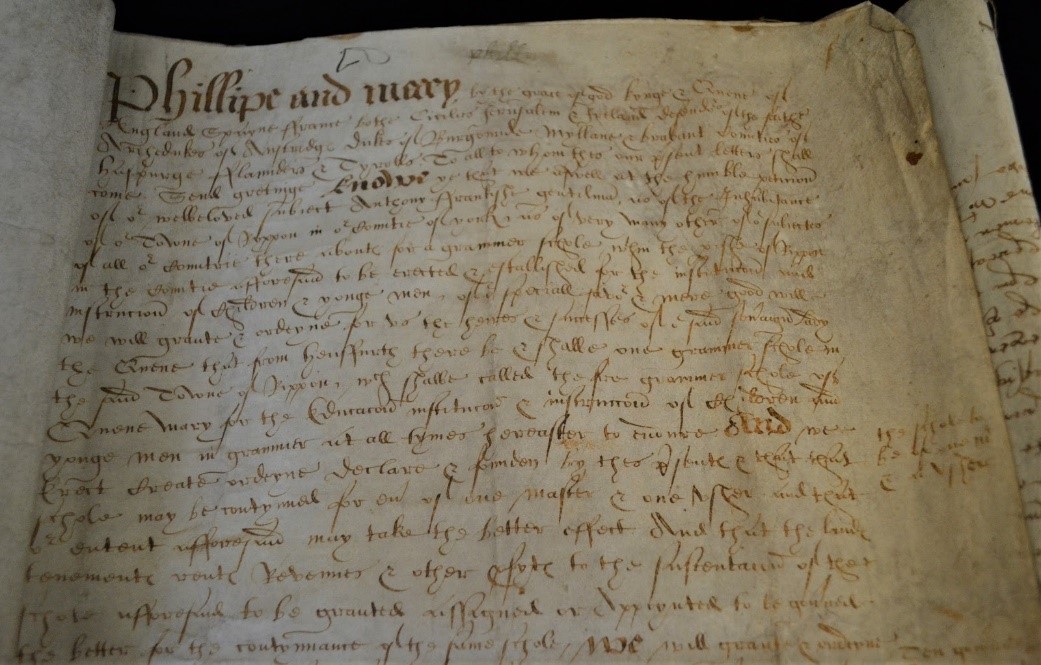 The second new archive carries a very recognisable name for anyone with an interest in York history.  The Tuke Taylor Papers records the lives of an offshoot of the famous Tuke family of York, following the marriage of Emma Priscilla Tuke, daughter of William Murray Tuke, to Douglas Day Taylor in 1879.  The archive contains a mixture of original and photocopied material reflecting a deep interest in Tuke family history.  This includes original Tuke family letters, Quaker marriage certificates, and even a series of intriguing notebooks which contain notes on angling, copies of poetry and prose, and even a questionnaire of likes and dislikes among family and friends, inscribed with the name of Mary Maria Tuke in 1865.  Some names in particular stand out - a letter from Joseph Rowntree in 1846, notes on the lives of William Tuke and Daniel Hack Tuke who were instrumental in the foundation of The Retreat psychiatric hospital, and of course the letters and papers of Emma, or ‘Emmie’, Tuke herself, from her school days, through marriage and into old age.  It is an archive which adds valuable context to our Rowntree, Tuke and Retreat collections..

The university’s Rare Books Librarian Sarah Griffin has also been hard at work doing catalogue enhancement for the Hugo Dyson Collection.  Dyson’s name might be well known to some of you already for his connection to J.R.R. Tolkien, author of The Hobbit and The Lord of the Rings.  He was a member of the ‘Inklings’ literary group at Oxford which also included Tolkien and Narnia author C.S. Lewis, and his collection of books came to the University of York in 1974.  Sarah has been adding more bibliographical detail to the existing records as well as details of previous owners, and has worked through 112 volumes so far.

This work has highlighted some fascinating links.  Dyson’s collection includes works owned by G.E. Selby, who corresponded with Tolkien during the writing of The Hobbit, as well as Arthur Darbishire, the first person to lecture on genetics in the UK.  There is even a book that was once owned by Lieutenant James Holman, a British adventurer who became the first blind person to circumnavigate the globe in 1832.  Among the many important individual volumes are a first edition of ‘Endymion’ by the poet John Keats and a first and second edition of William Wordsworth’s ‘Lyrical Ballads’.  You can read more about the Dyson Collection on our website.

Have a great weekend!