We hope you were all able to enjoy some of the good weather we had over the Bank Holiday weekend!

Despite the slightly truncated working week we’re pleased to report that we’ve added three new complete catalogues to Borthcat.  Two of these reflect one of our largest and most significant collecting areas, that of the Anglican church in Yorkshire.  The Papers of Charles Forder comprise the professional papers of an Archdeacon of York and Canon of York Minster who wrote the standard manual for newly ordained clergy, ‘The Parish Priest at Work’ in 1947.  Born in Norfolk, Archdeacon Forder was ordained in 1930 and came to the Diocese of York after the Second World War.  He was appointed Archdeacon in 1957 and also served as rector of Holy Trinity with St John, Micklegate, and St Martin cum Gregory in the city.  Although Archdeacon Forder retired in 1972, he continued to play an active role in the church, publishing ‘Churchwardens in Church and Parish’ in 1976, which aimed to encourage greater lay involvement in church life.

The connection of our second new catalogue is a little less obvious.  The Gray, Dodsworth and Cobb Deeds are a collection of papers from a York firm of solicitors - and, despite their name, they’re not in fact all deeds.  At the Borthwick we have quite a number of archives loaned or gifted to us by solicitors and you might be surprised at the variety and significance of the records such firms have in their keeping.  Our Munby and Scott archive for example, contains unique records of the York Diocesan Benefices Fund and the York Ragged Schools, and original deeds for Clifford’s Tower!  In contrast Gray, Dodsworth and Cobb evidently worked closely with the church and their small archive includes deeds of ecclesiastical properties in York, papers documenting the professional lives of two city vicars - James Dallin and John Overton - between 1790 and 1823, and records of the feoffees of St Saviour’s parish, York, from 1787-1894.  While ecclesiastical records form the bulk of the archive however, they are not the only subject.  Your eye may be caught by item number 50 - an intriguing written warning sent to Henry Warneford of Dunnington and signed by his neighbours demanding he refrain from hunting across their lands! 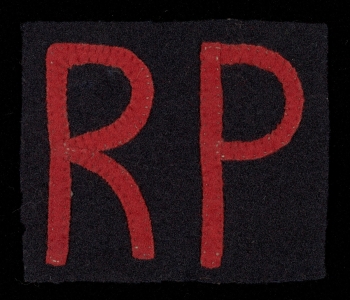 Our third and final archive is another collection of deeds, albeit one focused on a particular family and not a firm.  The Romans Deeds came from the Romans family of Riccall, who farmed in that area from at least 1804.  The archive includes family papers and photographs, property records for Riccall, Cawood and Howden, and records relating to local charities.  But perhaps most interesting is the ephemera which includes a notice for Riccall Agricultural Show in 1879 promising ‘bicycle races’ and an ‘efficient band’, and papers concerning the appointment of a new Overseer of Poor Relief in 1737.  The latter includes a replica of the badge to be worn by recipients - a small insight into the stigma associated with receiving parish relief in the 18th and 19th centuries.  You can see a photograph of the replica badge here, the ‘R’ standing for the parish of Riccall.