This week’s newest additions have a strong ecclesiastical bent.  The largest by far is the archive of Yorkshire Historic Churches Trust, quite a feat considering the Trust was only founded in 1988.  The YHCT was set up for the preservation, repair and maintenance of Yorkshire’s many historic church buildings, chapels and religious meeting houses and their grounds.  Since its foundation it has given nearly £3,000,000 in grants, including to churches here in York such as St Lawrence, All Saints, Pavement, and Holy Trinity in Heworth.

Church funding plays a part in another of our new catalogues.  Property consultants Smith-Gore have a long history of working directly with the Church of England to manage its Yorkshire property and income.  They were appointed Agents and Receivers to the Ecclesiastical Commissioners for their Northern Receivership in 1851, and the relationship has continued to this day.  The Smiths Gore Church Estates archive includes valuable manorial records dating back to 1725 and complements the property records of the Borthwick’s vast Diocesan Archive.

Supporting the work of Christian ministry in Yorkshire is central to our final two ecclesiastical additions.  The York Council of Churches is a branch of the World Council of Churches founded in 1948 in the wake of global war.  Described as a ‘worldwide fellowship’ of churches seeking unity, a common witness and Christian service, the York Council is responsible for carrying out this mission locally.  The archive includes records of the YCC’s ‘Celebration of Healing’ held in York Minster in 1991, and their 1997 pilgrimage to commemorate the arrival of St Augustine in Britain in 697.  Their focus on unity has much in common with that of the One Voice Ecumenical Organisation, which was founded in 1992 to organise an evangelical mission in York.  Now known as ‘One Voice York’, the organisation works to build relationships between local Christian leaders, churches and ministries for prayer, mission and social action.

Our remaining four archives are more varied in subject, a fair representation of the Borthwick’s wide ranging collections.  The addition of the complete York Children’s Trust Archive catalogue marks the last of a group of archives centred on the work of York children’s charities and schools, including the records of the Blue Coat and Grey Coat Schools, St Stephen’s Orphanage, York Charity Schools, and the Blue and Grey Coat Children’s Home.  We have also expanded our architectural records on Borthcat with the archive of the Vernacular Architecture Group, founded in 1952 to further the study of traditional buildings in the UK, and added a small but intriguing collection of records belonging to a pawn broker named Newman Barton who owned shops in Thorne, Doncaster and Barnsley between the 1890s and 1930s. 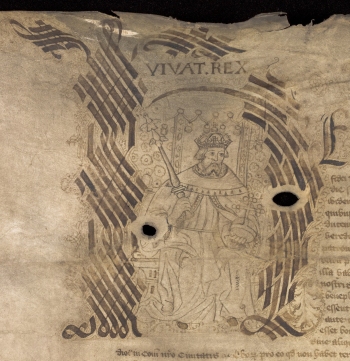 Finally we have added the complete catalogue of one of our oldest archives, both in terms of date and time in our custody!  Known as the Morrell Deeds, this collection was gifted to us in 1954, only a year after we opened, by John Bowes Morrell, a leading York citizen and the namesake of the university’s Morrell Library.  It also includes one of our most interesting 16th century records.  Morrell Deed 79 is a beautifully decorated grant made by Henry VIII to the Priory of St John the Baptist in Nunappleton, but it has a grim story behind it.  It was 1538 and the Dissolution of the Monastic houses had begun, upending centuries of religious tradition and reshaping the economic landscape.  Perhaps in return for a monetary gift, the nuns of Nunappleton succeeded in obtaining a grant from the King of a stay of dissolution, the intricately decorated deed 79 showing King Henry enthroned with a large letter H [see photograph].  However it only bought them a matter of months. The priory was dissolved in 1539 and the nuns subsequently pensioned off.  One of them, Anna Lankton, would feature in a 17th century poem by Andrew Marvell as the jailor of young Isabel Thwaites who escaped from the nunnery to marry William Fairfax in 1518.  The priory later became the Fairfax family estate.

Have a lovely Bank Holiday weekend!