The end of this week also marks the end of the Borthwick’s first full month of remote working.

Little did we know when we were sent home in March for a one day trial that we would still be here in May!  We’re happy to report that our online catalogue Borthcat is now back up and running as normal, thanks to some excellent work from our IT colleagues, and we’ve lost no time in uploading 3 new catalogues, taking our total now to 15, as well as adding the first of our hospital case book indexes.

There’s a distinct theme to this week’s catalogue additions - all of which began with a generous charitable bequest.  The earliest was made in 1518 when William Akroyd, rector of Long Marston, bequeathed land in Batley, Yorkshire, to fund either a kinsman or a local boy to attend the university of Oxford or Cambridge.  The Records of the Akroyd Exhibition, as it became known, charts the administration of the bequest, the boys who benefitted from it, and the development of the Batley lands that funded it from the 16th century to the 1960s - and Akroyd’s bequest is still funding education today.

More than a century after the death of Akroyd Charles Reade of Dalton in Nottinghamshire also made a bequest that was to shape a small Yorkshire community.  In his will of 1669 Reade left £2000 to purchase lands in or near to Drax to fund a free school for the boys of the parish and almshouses for six poor men and women.  The Records of the Drax Charity Trust and School tell the story of both school and almshouses, as well as giving fascinating insights into the foundation and operation of ‘Dame Schools’ and local infant schools which also received funding from the charity. The almshouses were closed in the 19th century but the free school survives as the independent Read School.

Last, but certainly not least, was the bequest of Mary Wandesford in 1725 who left lands in Brompton on Swale and stock to endow ‘a Religious House of Protestant Retirement’ for ten poor unmarried gentlewomen and to pay a schoolmaster to teach poor children at her home village of Kirklington.  Of all the bequests it is Wandesford charity that continues the least changed to this day.  Wandesford House was opened on Bootham in York in 1743 and continues to occupy the same site today as a home for single Christian women, over the age of fifty, who are in hardship, need or distress. 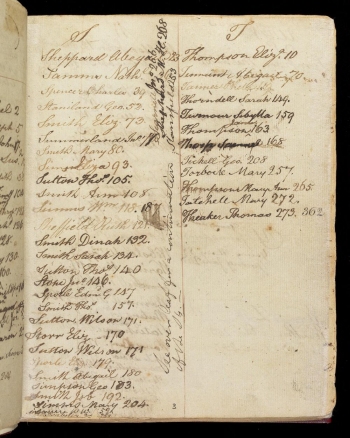 Finally we are very pleased to announce that users can now see the fruits of our behind-the-scenes work on our hospital case books.  Over a number of years volunteers from the York and District Family History Society have given many hours of their time to the task of indexing patient case books for The Retreat, Bootham, and Clifton hospitals.  The value of this work is enormous, allowing researchers to quickly find names and basic biographical details for thousands of patients who passed through these psychiatric hospitals in the 18th and 19th centuries.  In the past few weeks we have been processing this data for addition to Borthcat and you can now search the first three case books for The Retreat online.  Case book 1A covers admissions from 1796-1828; case book 1B from c 1803 - 1820s, and case book 2 from c 1828 - 1838.  Why not take a look and see what you find out! All of these case books have been digitised by the Wellcome Trust so look out for the links to the digitised versions in the online descriptions where you can read the full original entries.