We apply genetic and genomic data to understand interesting evolutionary questions. In particular, we are interested in the genetic and ecological causes of speciation, with a focus on Heliconius butterflies.

Speciation with gene flow
Species boundaries are porous, especially among recently diverged species. When speciation occurs in sympatry or parapatry, the divergence of the taxa occurs in the face of gene flow. Even in cases of allopatric divergence, the species may continue to exchange genes following secondary contact. We are investigating the extent of such post-speciation gene flow, and mechanisms that promote divergence in spite of the homogenizing effects of gene flow. We study speciation with gene flow in several systems including Heliconius butterflies, wood ants, cichlids and tawny dragons.

Adaptive introgression is a special case of gene flow, involving the flow of adaptive alleles among species. In Heliconius it appears that some of the convergent colour patterns shared among closely related species (e.g. H. melopomene, H. timareta and H. elevatus) may be a result of introgression of adaptive colour pattern alleles among the species. 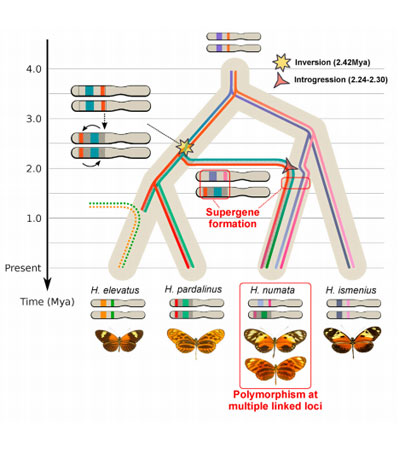 Post-speciation gene flow is common among Heliconius species, and in many cases this has been adaptive. Heliconius elevatus gained its protective mimetic colour pattern loci from Heliconius melpomene. An inversion important in the evolution of polymorphic mimicry in Heliconius numata introgressed into this species from Heliconius pardalinus.

Adaptation and speciation in Alcolapia soda lake cichlids
Alcolapia soda lake cichlids diverged from freshwater taxa a million years ago, and the four described species live in East Africa’s soda lakes Natron and Magadi. These lakes contain some of the most hostile aquatic environments known to support teleost fishes. Alcolapia have adapted to survive in extreme aquatic conditions of high pH (8.8-10.2), high salinity and high temperatures (30-43°C). These species have the highest recorded metabolic rate known in fishes and among the many physiological adaptations, they are the only noted 100% ureotelic fish, have highly derived sperm morphology, are facultative air breathers, and have a specialised trifurcated gut. Geological evidence suggests that this adaptation may have occurred over as short a period of time as 10,000 years. These fishes belong to the the genus Oreochromis, containing the commercially farmed Nile tilapia (O. niloticus) and other important aquaculture species. We are studying adaptation and speciation in this group of cichlids. 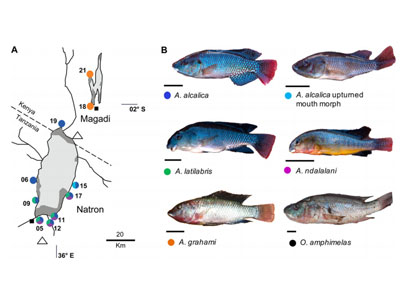 Many studies have reported correlations between an individual's fitness and their heterozygosity measured using genetic markers. In particular, several pinniped species show such correlations at a number of fitness traits. In collaboration with Joe Hoffman (Bielefeld University), we are investigating whether these correlations are the result of inbreeding (genome-wide effect), or whether they represent local genetic effects.

‌
I aim to develop students’ deep understanding of a subject. As such, I focus on enabling a thorough appreciation of fundamental principles, rather than on factual knowledge.

‌
My lectures cover a range of topics in population and ecological genetics, and are based on using genetic data to understand evolutionary questions. I use interactive teaching methods, workshops, problem-based learning, and discussion groups of relevant scientific papers to allow active participation by the students in their learning process.

‌
My tutorials are broadly on the topic of ecological genetics, with a particular focus on speciation, conservation genetics and high-throughput sequencing methods (and their applications). Over the course of the tutorials students not only advance their subject knowledge, but also develop their presenting and writing skills, and their ability to comprehend and evaluate primary literature.

‌
The projects I offer are closely linked to ongoing research in my group, and are generally on evolutionary topics using Lepidoptera. Projects range from bioinformatics analyses of genomic sequence, analysis of phenotypic variation, and lab-based population genetic analysis. Students are encouraged to develop their own ideas and hypotheses.