The Thomas group has two main interests that are linked by the bacterium Escherichia coli. We are interested in the mechanisms used by different bacteria, mainly human pathogens, to utilise the important host-derived molecule sialic acid. This includes how this sugar acid is transported across the inner membrane of bacteria and here we study the sialic acid-specific tripartite ATP-independent periplasmic (TRAP) transporter from Haemophilus influenzae as our main system. We also used constraint-based modelling to understand the obligate symbiosis between a number of bacteria and their insect hosts, focussing mainly on the interaction between the E. coli relative Buchnera aphidicola and its aphid host.

We have recently provided the first mechanistic detail on the function of a TRAP transporter, using the SiaPQM sialic acid transporter from H. influenzae and have discovered a sialic acid mutarotase that is encoded by some bacterial pathogens to help that acquire sialic acid effectively from their host. Also, we have helped in the annotation and interpretation of the aphid genome sequence in relation to its symbiotic interaction with Buchnera. sp. 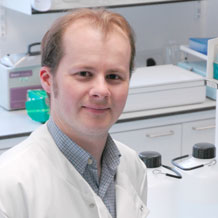