Curating the self: Social Media, Identity, Memory and the Mediated Vernacular.

Since the invention of photography and consequently cinema, the camera has been used to capture or document reality; actual events that happened at that moment in time. The snapshot and amateur cinefilm, or video, became motifs of the development of social photography as cultural practice: a way of seeing and being seen. The first two decades of the 21st century have experienced an unprecedented change in the production and consumption of personal media artifacts, a paradigm shift in the ability to document everyday life and the capacity to share with ease.

This interdisciplinary research examines this paradigm shift, situated in the field of media ecology, exploring the sociocultural context of representation, both of the self and the vernacular. It questions what impact these have had on identity, memory, and the documentary of the everyday. Do social media platforms and the distributed self signify a new era of storytelling? In an age of media entanglement are we experiencing the creation of new social value with the curation of the self?

Richard became interested in the possibilities of interactive media in 1994, gaining industry practice as a digital media producer on a range of projects for commercial and arts organisations, before entering academe in 2000. He was a senior lecturer in new media at the Hull School of Art & Design, and then Deputy Head of the Lincoln School of Film & Media.

In 2019 he was awarded Google for Education Certified Innovator status, an award in recognition and support of educators who are using technology to solve meaningful challenges and who demonstrate a commitment to leading transformation in education.

Richard’s research is at the intersection of media, culture and technology, exploring the creative opportunities and sociocultural impact. He is fascinated by new forms of vernacular storytelling and documentary in the age of social media.

In this era of instantaneous capturing and sharing, life has become mediated by and filtered through technology, notions of the self, memory, time and place have fundamentally shifted. He has produced award-winning projects exploring participatory culture and the digital vernacular including ’24-hours.in’ and ‘15x15’, shortlisted for the South by Southwest, SXSW Interactive Awards and winner of the Flashforward Film Festival. 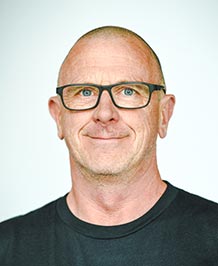