From the Underdog to Top Dog – Gender representation and unconscious bias in sports films from the late 1970s - 2020. (working title)

My PhD thesis engages with discussions about the portrayal of the female ‘underdog’ in sporting films and its connection to gender representation. The idea of conscious / unconscious writer bias in terms of character and narrative construction will be explored, in addition to audience reception.

After graduating from the University of Lincoln with a First Class Honours in Media Production, I began my professional media career working at a major London casting agency. While I learned a lot from this experience, I began to miss the practical on-set rush, which led to working as an Assistant Producer for Ideal World, accruing 500+ hours of Live Television, in addition to working as a freelance production manager for stage comedies and features/short films.

Combining my experiences to date I returned to the University of Lincoln where I now teach as an Associate Lecturer. As a media practitioner I teach cross-programme, specialising in Live Television Production, Script Writing, Fiction / Documentary Production and Multi-Camera theatre. When teaching allows, I am a freelance scriptwriter and copywriter. 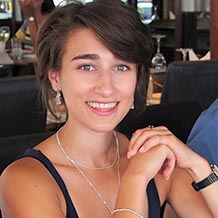