Philip Burnett is a Leverhulme Early Career Fellow in the School of Arts and Creative Technologies. His research focuses on the diaspora of church music through the British Missionary Movement of the 19th century, focusing specifically on Southeast Africa.

His Leverhulme project, entitled ‘Singing From the Same Hymn Sheet’, demonstrates the critical significance of the missionary hymn repertoire, particularly how the musical language of hymns was localised and indigenised, in order to explore the role of religious culture in British imperial expansion and its legacy in present-day communities.

The project combines archival work, fieldwork, and creative response to explore the role of missionary and religious culture and its legacies in present-day communities found along the Indian Ocean Coast of Africa. The project explores how, at different times and in different places, cultural and religious practices provided a means for people to resist, collaborate, reinterpret, and refashion themselves. The project marks an intervention into current decolonial discourses and understandings of the complexities of Britain’s imperial and colonial legacies.

Philip received his PhD from the University of Bristol in 2020. His thesis, ‘Music and mission: A case study of the Anglican-Xhosa missions of the Eastern Cape, 1854-1880’, examined the role of music and soundscapes in the construction of missionary identities and the role that local musical practices played in shaping wider missionary culture.

He is also interested in the experiences of mission-educated Indigenous people who travelled to and studied in Britain during the 19th century, especially the Sierra-Leonean born and Oxford-educated Christian Cole and the sons of amaXhosa chiefs from Southern Africa. He has presented at conferences in South Africa, Europe, the United Kingdom, and North America.

Outside of academia, Philip is an organist and choir trainer, and a very keen cricketer. 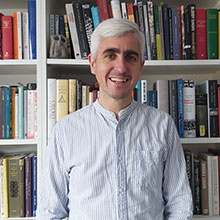