Dr Hasmik Gasparyan
Lecturer in Directing for Film and Television

My PhD by Creative Practice (University of York) is on exploration of role of ‘cinematic silence’ in film practice, and my MA degrees are in Screen Documentary (Goldsmiths, University of London) and Feature Film Direction (Armenian State Pedagogical University).

From 2000-2010 I worked as a television director specialising in documentaries as well as creating entertaining and educational television programmes for the young audience. I worked as a director on single and multi-camera productions; scripted and unscripted at Shoghakat and H2 television studios in Armenia. Some of my works focusing on cultural diversity and on vulnerable representatives of our society have been presented at different international events. My Boundless 2008 prize has given me the opportunity to take media internships at Westdeutscher Rundfunk (WDR) in Germany and Dutch Programme Foundation (NPS) in The Netherlands. Since 2010 I have been working in the UK as an independent self-shooting director with particular interest on observational documentary.

My practice-based research PhD thesis completed in 2019 (University of York), is presented through the production of two original observational documentary films – ‘Three Pianos’ (2016, 10min) and ‘Narara and Kiko’ (2018, 45 min) - accompanied by an extensive literature review and description of the qualitative methods used (interviews with film practitioners and film case studies). It looks at cinema from the late 1960s onwards and investigates the representation of silence in film by studying the directorial approaches used by Akerman, Haneke, Antonioni, Tarkovsky, Kubrick, Keiller and Wiseman.

Prizes: Winner of the Best Postgraduate Poster competition from the British Association for Film, Television and Screen Studies (BAFTSS) 2019

I remain a working filmmaker who is always looking for interesting characters and stories to tell in the most fascinating and constantly evolving cinematic language.

In the past I also worked as a film pre-viewer for the Sheffield Doc/Fest International Film festival. I am an active member of ‘Directors UK’ and ‘British Association of Film and Screen Studies’ (BAFTSS). 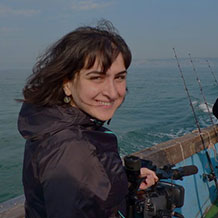