Hannah Davies is a playwright, theatre-maker and performance poet. She trained as an actor at Mountview Academy of Theatre Arts and went on to work in theatre, radio and television before studying playwriting on the Royal Court Young Writers Programme. Her first play was performed as part of the Royal Court Young Writers Programme 2007. Since then she has worked as a playwright with companies including: York Theatre Royal, Pilot Theatre, Dry Write, Ice&Fire Theatre, Trestle Theatre, Hannah Bruce & Co, Company of Angels, Tara Finney Productions, York Mediale, Flanagan Collective, Guild of Misrule.

Hannah is a graduate of the School of Arts and Creative Technologies and has an MA in Theatre: Writing Directing and Performance and a PhD by Creative Practice in Playwriting.

Hannah teaches playwriting across both BA and MA theatre programmes and is programme leader of the MA in Playwriting, a role she shares with Bridget Foreman.

Hannah is a graduate of the TFTI department and has an MA in Theatre: Writing Directing and Performance and a PhD by Creative Practice in Playwriting. Her portfolio of plays and accompanying doctoral thesis explored writing and performing motherhood.

Hannah’s research is practice led and focuses on creating work for the stage. She has a particular interest in site-specific audio digital work as well as solo performance and the interplay between music and spoken word poetry. She also has a developing interest in life writing, and the benefits of a writing practice in relation to resolving trauma and chronic health conditions. She is currently working on a twelve-month project, developing both her writing and teaching craft around memoir, with support from the Arts Council England.

Hannah’s theatre company Common Ground Theatre, is currently working with Dalby Forest and the Forestry Commission with support from the Arts Council England to create a piece of theatre that responds to the heritage of the forest and the history of the unemployment work camps that were situated there in the 1930s.

Hannah is Associate Artist at York’s leading spoken word night, Say Owt and regularly hosts events and workshops as part of her role. She is also Artistic Director of Common Ground Theatre. She is currently working with Pilot Theatre as Associate Artist and writing mentor on their Northern Girls project. 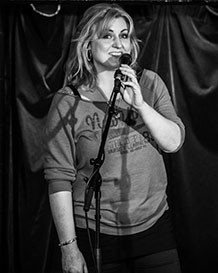