After studying at Chetham's School of Music for nine years, Eleanor read music at the University of Cambridge, becoming a Senior Scholar and winning the Donald Wort Prize for academia. While at university, Eleanor also accompanied Trinity College Chapel Choir for their evensongs, tours and for three recordings of music by Leighton, Ešenvalds and Howells, all of which were nominated for Gramophone awards. Having been the first female Organ Scholar of Trinity College, upon graduating Eleanor received the Forbes-Dunlop Grant from the Women’s Careers Foundation which then enabled her to work as an Adami Award Junior Fellow at the Royal College of Music.

Eleanor later offered cover as a Staff Accompanist at Chetham's School of Music before returning to London as a Piano Accompaniment Fellow at the Royal College of Music and a member of the London Philharmonic Orchestra’s Foyle Future Firsts Development Programme. Eleanor is now the Head of Keyboard Studies at Queen Margaret's School, York, alongside continuing to perform as a soloist, chamber musician and duo partner. 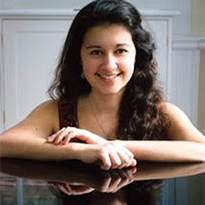