Gareth is a medieval archaeologist who specialises in reconstructing ceramic production practice. His expertise lies in the application of scientific techniques, including thin section petrology, x-ray, pXRF and SEM-EDX, to provide insight into forming techniques, glaze recipes, firing regimes and raw material sourcing and processing activities. In combination with historical an archaeological evidence Gareth’s research provides important insight in to the development and dissemination of craft practices and pottery use in post-Roman Britain and Europe.

Gareth completed his PhD at the University of Sheffield in 2013. He took up the role of Technical Specialist in Artefact Studies in 2019 after six years as laboratory manager in the Department of Archaeology, University of Sheffield. He manages the King’s Manor laboratories and works closely with colleagues on the YEAR centre on a range of experimental archaeology projects.

Gareth’s research focus is on understanding pottery use and manufacturing practices. His PhD pioneered the application of use-alteration analysis to post-Roman British pottery, providing important insight in the pre-burial uses of early Anglo-Saxon cremation urns. Employing thin section petrology he identified domestic and funerary pottery with a common source, drawing direct links between creation cemeteries and settlements, revealing the catchment areas that these cemeteries served.

His research has revolutionised our understanding of the introduction of the potters’ wheel to Anglo-Scandinavian England in the late 9th century, and the mechanisms that facilitated the spread of this technology throughout eastern England. He is currently collaborating with Profs Dawn Hadley and Julian Richards on the Tents to Towns project, investigating the impact of the Viking Great Army, and Dr Steve Ashby, Prof Ol Craig and Dr Anita Radini on Melting Pot, examining food and identity in the Viking Age.

Perry, G. 2014. All form one and one form all: the relationship between pre-burial function and the form of early Anglo-Saxon cremation urns. In Blinkhorn & Cumberpatch, The Chiming of Crack'd Bells: Current Approaches to Artefacts in Archaeology. BAR International Series 2677.

Perry, G. 2012. A hole for the soul? Possible functions of post-firing perforations and lead plugs in early Anglo-Saxon cremation urns. In Jervis & Kyle, Make Do and Mend: Archaeologies of Compromise, Repair and Reuse. BAR International Series 2408. 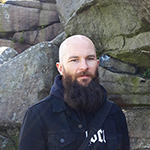