Catching reflections in the ‘windows of the soul’

A new study shows bystanders faces can be identified from tiny reflections in the eyes of people in photos. 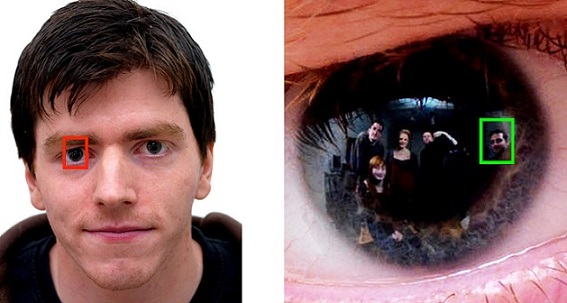 By zooming in on high-resolution passport-style photographs, the researchers (our own Dr Rob Jenkins, working with Christine Kerr of Glasgow University) recovered images of bystanders from reflections in the eyes of photographic subjects. These were sufficient to allow participants in their experiments to match and recognize the reflected faces.

This might have important implications for the detection of crimes such as kidnappings, where the victims are photographed and analysis of photographs seized as evidence could help reveal networks of associates and link individuals to locations.

The study has attracted a great deal of attention, with the open-access paper  having been viewed over 60,000 between it’s publication on 26th December 2013, and the 10th of January.