Former President of the Federal Republic of Germany Professor Dr Horst Koehler is among eight leading figures from the world of performing arts, politics, business and journalism to receive honorary degrees from the University of York this weekend (19 and 20 January 2018). 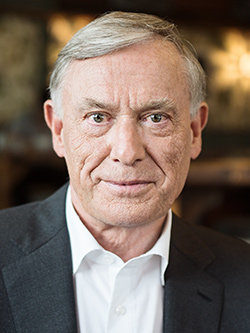 Horst Koehler served as 9th President of the Federal Republic of Germany between 2004 and 2010. During his term of office, he was a staunch campaigner for a global transformation towards sustainability and a better partnership with Africa.

President Koehler holds a PhD in Economics from the University of Tübingen, where he also serves as honorary professor since 2003. In 1990, he was appointed state secretary in the Ministry of Finance, negotiating the German-German monetary union, the withdrawal of Soviet troops from East Germany and the Maastricht Treaty on European Monetary Union.

In 1993, he left the Federal Government to become President of the German Savings Banks Association. In 1998, he returned to the public sector as President of the European Bank for Reconstruction and Development (EBRD). Two years later, he was appointed Managing Director of the International Monetary Fund (IMF).

President Koehler continues to serve in a number of national and international honorary positions. In 2017, UN Secretary-General Guterres appointed him as his Personal Envoy for Western Sahara.

President Koehler’s profile as a politician at the heart of European politics, combined with his determined policy-making and policy reform in respect of international banking, international development, corruption and international trade all align significantly with the University of York’s newly emergent International Development Network and the University’s broader institutional values on social justice and tackling global inequality.

In particular, President Koehler’s work to “forgive’” developing country debt, his focus on establishing more balanced and fair relationships between African countries and Europe, and his work on banking reform and global ethics all have significant synergies with key areas of policy research in the Law School and the Departments of Politics and Economics.