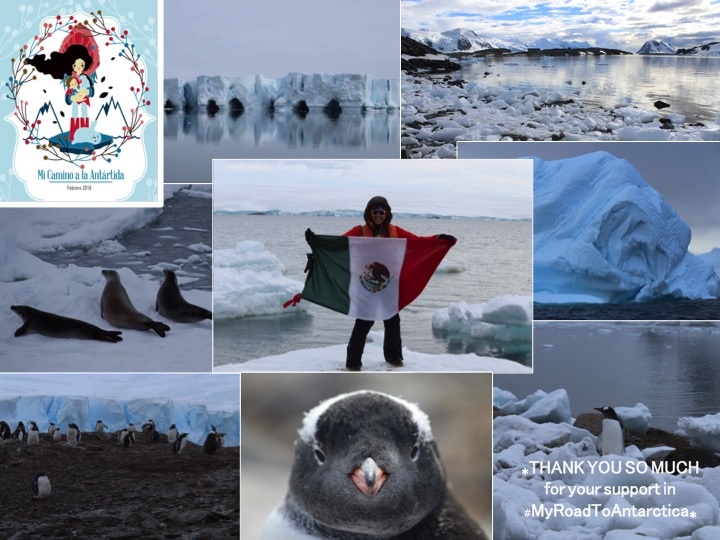 Sandra Guzmán, PhD student in the Department of Politics, recently visited Antarctica as part of a Homeward Bound expedition. Read Sandra's report on her trip below.

From February 18th to March 11th, 2018, I had the opportunity to live one of the most pleasant experiences of my life: I visited Antarctica. This is part of the Homeward Bound Project which was born in Australia and seeks to strengthen the leadership of women in science so that in 10 years it will create a network of 1,000 scientists from around the world.

The reason why this initiative is interesting, from my point of view, is because it brings together three important factors: women, Antarctica and climate change.

For years, there has been a discussion of the need to empower women and give them more space in strategic sectors such as science. Some data that illustrates the inequity that we, women, have been living are: 1) 38% of women who die in the world die because of gender violence [1]; 2) there are countries in which women earn up to 75% less than men doing the same job [2]; and 3) globally, only 21% of management positions are held by women[3]. And that is just some of the data.

Despite the difficult reality that we face, in this expedition, I met about 80 women from more than 20 countries, who are working in various disciplines, including one Nobel Prize winner. The reality is that although history has not done us justice at all, the work of hundreds of women has allowed us to take these spaces and opportunities that today make us agents of change.

On the other hand, Antarctica is a difficult place to describe with words; it is simply a territory charged with energy that has an indescribable beauty and despite its force, it is extremely vulnerable.

With a unique and special flora and fauna, 90% of Antarctica’s area is covered by ice and it possesses 80% of the freshwater reserves of the planet.

Why should we care about Antarctica?

Because the advanced melting of glaciers in the territory is generating an increase in sea level that will affect the coastal areas of the entire world.[4] Because with the affectation of the food chain due to massive fishing and global warming, we are destroying species like the Adelie penguins that are endemic to the Antarctic zone but whose impact on the chain could have impacts not yet discovered.

One of my purposes as a social scientist in the expedition was to document the impacts of climate change in Antarctica, which I not only evidenced with my own eyes, but I could hear in the voices of various scientists in the stations we visited (Carlini, Argentina; Palmer, United States; Rothera, United Kingdom), in addition to the voice of people who have observed such changes on a daily basis in other stations (Cámara, Argentina; Port Lockroy, United Kingdom and The Great Wall, China).

The results of this expedition, from the point of view of climate change, are extremely alarming. Antarctica is suffering from the havoc of climate change, the melting of glaciers, the death of species, the changes in the rain pattern of this driest continent and the gradual affectation of species in the sea floor; these are just some of the observations collected in these 20 days of the expedition.

However, it was encouraging from the human point of view, because this group of women, experts in dozens of disciplines, has clear ideas of what should change in the world to ensure a sustainable future.

We are committed to this fight and to put in place the solutions that are needed.

We are the present and we are the ones changing history yet although we still have serious challenges and obstacles, the strategy will be to work together and strengthen each other to achieve the goals we have set, because together we are stronger, like the motto of Homeward Bound... Mother Earth needs her daughters.

You can read more about Sandra's trip here.