the largest lecture theater is sold out a week before launch 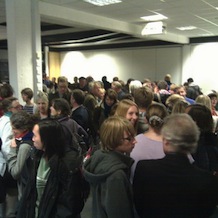 The new Palaeo Centre at York was launched with a sell-out workshop in the afternoon, capped off by on open lecture in the evening from Alice Roberts

Both events reached capacity more than a week before, leading to queues at the entrance for hopeful latecomers.

Those that were able to attend the workshop were treated to a tour de force from speakers including both invited speakers and members of Palaeo including new research such as a new dating technique, insights from genetics and information from dirty pots.

In the evening session Alice not only explored the role that anatomy plays in the understanding of our origins, but included as one of her demonstrations a 3D model of her own skull.