Farming made no immediate impression on Baltic hunter-gatherer-potters, who still used their pots to cook fish 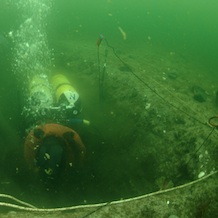 A team lead by Oliver Craig (BioArCh) and Carl Heron (Bradford) examined molecules extracted from 133 ceramic vessels and 100 burnt food crusts, dating to immediately before and after the first evidence of domesticated animals and plants in the Western Baltic.  Some of the pottery was recovered from sites now inundated by the Baltic.  Evidence for fish was found in one in five pots even afterthe transition to agriculture, supporting that the arrival of the first farmers did not have such as dramatic impact on the local hunter-gatherers than earlier evidence had lead some researchers to believe.

Their study is published in Proccedings of the National Academy of Sciences USA.