Absence of genetic diversity the result of domestication 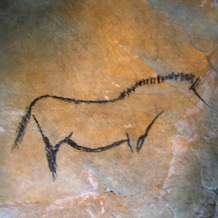 An international team of researchers has used ancient DNA to produce compelling evidence that the lack of genetic diversity in modern stallions is the result of the domestication process. The team, which was led by Michi Hofreiter from the University of York, UK, has carried out the first study on Y chromosomal DNA sequences from extinct ancient wild horses and found an abundance of diversity.

The results, which are published in Nature Communications, suggest the almost complete absence of genetic diversity in modern male horses is not based on properties intrinsic to wild horses, but on the domestication process itself.

Professor Hofreiter said: “Unlike modern female domestic horses where there is plenty of diversity, genetic diversity in male horses is practically zero.

“One hypothesis to explain this suggests modern horses have little Y chromosome diversity because the wild horses from which they were domesticated were also not diverse, due in part to the harem mating system in horses, implying skewed reproductive success of males. Our results reject this hypothesis as the Y chromosome diversity in ancient wild horses is high. Instead our results suggest that the lack of genetic diversity in modern horses is a direct consequence of the domestication process itself.”

The Y chromosome is a valuable tool in population genetics, providing a means of directly assessing evolutionary processes that only affect the paternal lineage. So far mitochondrial DNA studies have failed to discover the origin of domestic horses. However, these new Y chromosomal markers now open the possibility of solving this issue in detail.

As part of the study, researchers sequenced Y chromosomal DNA from eight ancient wild horses dating back from around 15,000 to more than 47,000 years and a 2,800-year-old domesticated horse. The results were compared to DNA sequences from Przewalski horses - the only surviving wild horse population – and 52 domestic horses, representing 15 modern breeds, which had been sequenced previously.

Domestication of horses dates back approximately 5,500 years. DNA from the skeletal remains of a 2,800-year-old domesticated stallion from Siberia showed that in contrast to modern horses, Y chromosomal diversity still existed several thousand years after the initial domestication event for horses.

Professor Hofreiter said: “This suggests some level of Y chromosomal diversity still existed in domestic horses several thousand years after domestication, although the lineage identified was closely related to the modern domestic lineage.”

The study was carried out in Germany by Sebastian Lippold, from the Max Planck Institute for Evolutionary Anthropology in Leipzig, Germany. The results were then independently replicated at the Centre for GeoGenetics at Copenhagen University, Denmark.

Sebastian Lippold said: “Working on ancient Y chromosomal DNA was especially challenging but the only opportunity to investigate Y chromosomal diversity in wild horses. For now we have a first idea of ancestral diversity and therefore a better impression of how much diversity has been lost. Basically this was an important first step and points to the potential the Y chromosomal marker could have in order to further investigate domestication history in horses.”

Beth Shapiro, an Assistant Professor in the Department of Biology at the Pennsylvania State University, USA, carried out the analysis and interpretation.

She said: “Most ancient DNA research until now has focused on a different part of the genome – the mitochondrion – which is much more abundant in cells and therefore much easier to work with when the DNA is degraded. This has been a serious limitation in ancient DNA research, because we generally only have a good idea what happened along the maternal line. Here, we’ve been able to look at what happened along the paternal lineage, and, probably unsurprisingly, we see something different going on in males than in females.

“This is exciting stuff, and means we can start getting a much better picture of how events like domestication and climate change have shaped the diversity of organisms alive today.”