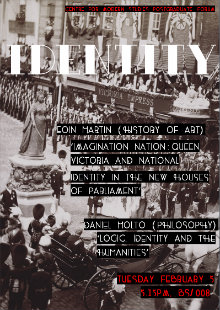 In this interdisciplinary seminar, Eoin Martin and Daniel Molto will explore issues surrounding identity and its applications in the humanities.

Eoin Martin is a student in the History of Art department at the University of Warwick, based in York. His doctoral thesis, ‘Victoria, Albert and Sculpture’, forms part of the AHRC-funded project ‘Displaying Victorian Sculpture’, a collaboration between York, Warwick and the Yale Center for British Art. His talk, entitled ‘Imagination Nation: Queen Victoria and National Identity in the New Houses of Parliament’, analyses concepts of monarchy, nation and imagination in relation to images of Queen Victoria in the New Houses of Parliament. This building, constructed between 1834 and 1870, was supposed to embody the unity of the United Kingdom of Great Britain and Ireland. Drawing on Benedict Anderson’s notion of the nation as an ‘imagined political community’, this talk focuses on a prominent statue of Victoria within the building, executed by the sculptor John Gibson and completed in 1855, and argues that such images represented an attempt to imagine the nation by appealing to the national imagination.

Daniel Molto is a PhD student in the department of Philosophy here at York, working on relative identity and logic. His talk, ‘Logic, Identity and the Humanities’, will explore the relationship between different concepts of identity in different disciplines within the humanities, setting forms of identity (national identity, cultural identity, religious identity, sexual identity) alongside the more specialised use of ‘identity’ found in contemporary analytic philosophy on the other. He will suggest that philosophy ought to provide a paradigm, or a generalized notion of identity, by which different discourses are illuminated, and argues that the gap between philosophy and the humanities has widened to the extent that this is currently impossible, and propose a new concept of identity that bridges the gap between analytical philosophy and the humanities.