Historians usually suggest the modern era began in the late eighteenth century with the French and American Revolutions. When the modern era ended is a much more complicated issue. On the one hand, there is the question of how much distance we need from events for them to qualify as “history”, rather than “politics” or “current affairs”. But a convenient end point is often assumed to be the late 1980s when the Berlin Wall came down, symbolising the end of communism in Europe and the apparent triumph of liberal democracy in the west.

Historians studying the modern era in Britain have asked a wide range of questions about the period. Key themes include the rise of democracy and the emergence of modern political parties; the development of capitalism; the changing relationship between people and the state; the impact of science and technology; and Britain’s relationship with the rest world of the world, particularly via its empire. Historians used to focus on politicians and other elite figures. But in the past 40 years they have spent much more time exploring a more extensive range of experiences. This broader view means there is a wide range of source material available, from government papers to newspapers to films to the diaries written by ordinary people.

This collection includes primary material spanning more than 300 years. Over 100,000 pages of diaries and letters reveal the lives of 500 women.

The British Cartoon Archive is dedicated to the history of British cartooning over the last two hundred years. It holds the artwork for more than 150,000 British editorial, socio-political, and pocket cartoons, supported by large collections of comic strips, newspaper cuttings, books and magazines.

The British Library has an extensive collection of modern texts available online. This resource is organised thematically, with collections including the campaign for the abolition of the slave trade, Victorian Britain, and World War One. The ‘Sources from History’ section is particularly useful as it allows the user to browse historically important digitised texts in chronological order.

A collection of newsreels and related source material, including the entire surviving paper collection for the British Pathe newsreel and cinemagazine series, and documents relating to British Paramount News, Gaumont British News, and Universal News.

You (or your institution) must be a BUFVC member to view this collection.

C19 draws on established indexes (such as the Nineteenth Century Short Title Catalogue (NSTC), The Wellesley Index, Poole's Index, Periodicals Index Online, and the Cumulative Index to Niles' Register 1811–1849) to create integrated bibliographic coverage of over 1.7 million books and official publications, 70,000 archival collections, and 22.7 million articles published in over 2,500 journals, magazines, and newspapers.

The Carlyle Letters are the collected letters of Thomas and Jane Welsh Carlyle. They married in 1826, and in 1834 moved to London where they quickly established themselves at the center of a growing circle of influential artists, philosophers, writers, historians, politicians, and editors. Their letters give a unique insight into their lives, and users can browse by date, recipient, or subject area.

Cause Papers in the Diocesan Courts of the Archbishopric of York, 1300-1858

The York cause papers are the papers of individual cases of the ecclesiastic court in York. The cause papers cover a wide variety of cases such as disputes over marriage contracts, tithes and the validity of wills. The cause papers present a valuable insight into familial and community relations. The source is of particular interest to social, cultural and legal historians. While some of the entries only provide basic information on cases, others contain colour images of the original cause papers. The website also provides historical background of the Diocesan Courts and guides to using the cause papers.

Charles Booth's Inquiry into the Life and Labour of the People in London, undertaken between 1886 and 1903 was one of several surveys of working class life carried out in the 19th century. It is the only survey for which the original notes and data have survived and therefore provides a unique insight into the development of the philosophy and methodology of social investigation in the United Kingdom. This online archive is a searchable resource giving access to material from the Booth collections of the Library of the London School of Economics and Political Science and the Senate House Library.

Clergy of the Church of England Database

The Clergy of the Church of England Database allows the user to search the records of clerical careers between 1540 and 1835. The database contains records such as education and appointments for specific individuals. The database can also be browsed by location to examine the succession of clergymen holding a specific appointment. As well as providing biographical information for clergymen of this period, the database can also be used more generally to research social, economic, and ecclesiastic history.

A collection of manuscript, visual, and printed works relating to the history of travel. These accounts of the English abroad, c1550-1850, highlight the influence of continental travel on British art, architecture, urban planning, literature, and philosophy.

Hugh Pemberton is a Reader in Contemporary British History at the University of Bristol, UK. He has brought together an extensive list of resources for historians of modern Britian. This includes links to a range of source material available online and a list of archives across the UK, some of which have digitised part of their collections.

The Imperial War Museum's collections cover all aspects of twentieth and twenty-first century conflict involving Britain (as well as the Commonwealth and other former empire countries). This includes art, film, photographs, sound, new media, and writings ranging from material produced for official or military purposes, to the reactions and memories of 'ordinary' people.

The Internet Modern History Sourcebook is a collection of primary sources dating from the end of the reformation to the modern day. The sources are organised chronologically through loose themes such as ‘Everyday Life’ or ‘Absolutism’. This acts as an approximate time plan for the social, economic, and cultural development of Europe across the period. The sources available in each section are extensive and are collected from a wide variety of genres. Due to the breadth of material, the Modern History Sourcebook is an excellent source for historians interested in the legal, political, military, social, and cultural history of Europe.

The library of the London School of Economics and Political Science (LSE) have digitised some of their collection. The LSE Digital Library allows users to search by keyword, or browse collections such as material from the women's library at LSE and the Fabien Society, as well as archives relating to the university itself.

This resource covers the original Mass Observation project, the bulk of which was carried out from 1937 until the mid-1950s, and includes printed publications, photographs, and interactive features.

The NSTC project aims to index all printed works published in Britain, its colonies and the United States of America, all printed works in English wherever published, and all translations from English from the beginning of the nineteenth century to the end of the First World War.

It comprises more than 1.2 million records drawn from eight copyright and research libraries.

The National Archives in London hold over 11 million historical government and public records. The Archives have an ongoing project to digitise their collection and share it freely online. There is a substantial body of material available, which users can search by keyword or by a range of subject areas such as migration, maps, or domestic politics. There are also 65 useful guides on how to search for records in particular subject areas.

The Focus on Film project was jointly funded by The National Archives and the South East Grid for Learning. This website presents film as a historical source, and considers its advantages and disadvantages as evidence for the past.

The archive contains a range of original footage from the twentieth century. All clips have full background information and can either be viewed online or downloaded for free.

Full text of all papers issued by the House of Commons between 1715-present, with supplementary material back to 1688. These are the working documents of government for all areas of social, political, economic, and foreign policy. Fully searchable digitised images of original documents.

The Proceedings of the Old Bailey provide a valuable source on early modern legal proceedings. The Proceedings do not provide a full transcript of court cases but an account of the criminal cases produced shortly after the fact for publication for a popular audience. The website also provides the reader with substantial guidance on the history and development of the proceedings as well as tips on using them as a historical source.

The library at the University of Warwick, UK, has digitised some of its collection. Subjects include British healthcare 1900-1948, the 1926 General Strike, and cycling in Britain.

The Wellcome Library is a world-class online resource for the history of medicine. The library has digitised a substantial proportion of its holdings and made the content freely available on the web. The collection, which is still growing, includes books, manuscripts, audio and video files, and images which users can browse by topic, genre, author, or collection. 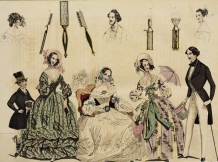