Helen Hills is Professor Emerita of Architectural and Art History in the Department of History of Art at the University of York.

Helen Hills studied Modern History at the University of Oxford before turning to History of Art at the Courtauld Institute of Art in London (MA with Distinction) where she also did her PhD. Her doctorate study of inlaid marble decoration in Sicily later became her first book, Marmi Mischi Siciliani: Invenzione e Identità (Società Messinese di Storia Patria, 1999), the basis of a trajectory which includes over 50 articles and eight books, of which the most recent is The Matter of Miracles: Neapolitan Architecture and Sanctity (Manchester University Press, 2016). Hills has a contract with MIT Press for her next book on silver.

Helen Hills’ first job was with ‘Zuriya’, a brilliant experimental African Theatre Company in South London. Since then, she has enjoyed wide experience of teaching in universities, including Queen's University in Canada (for nine months while completing her PhD), at the University of North Carolina at Chapel Hill, USA and at the University of Manchester, UK before joining the History of Art Department at York as Anniversary Reader in 2005. She was promoted to Professor in 2008 and was the first woman professor of Art History at the University of York.

Helen Hills has published extensively in the field of architectural history and theory, baroque art and theory, gender and sexuality, and contemporary visual culture, including three scholarly monographs, six edited books and journal special issues, and numerous chapters and articles. Her current book project on silver is with MIT Press.

The Matter of Miracles: Neapolitan Baroque Architecture and Sanctity was published by Manchester UP in 2016. Invisible City: The Architecture of Devotion in Seventeenth-Century Neapolitan Convents (Oxford University Press, 2004) was awarded the Best Book Prize in 2004 by the USA Society for the Study of Early Modern Women.

Rethinking the Baroque (Ashgate, 2011) offers essays by leading scholars from art history, philosophy, and literature studies to reconsider the potential of ‘baroque’; New Approaches to Naples (2013) offers a range of ways to come across Naples outside the usual paradigms formed elsewhere.

Hills founded and organized the Neapolitan Network, an exchange and meeting point for scholars of Neapolitan culture (traditionally neglected in the humanities) from all over the world which developed from an AHRC-funded Network and series of workshops in 2010/11.

Helen Hills is recipient of numerous distinguished research awards and scholarships from the AHRC, British Academy, the Leverhulme Trust and the Getty.

Keynote addresses and papers at conferences and research seminars from Adelaide in Australia, to Santiago in Chile, and Harvard in the USA.

2014: Ruth and Clarence Kennedy Professor of Renaissance Studies at Smith College, Massachusetts. She took up this role, which involved giving public lectures and teaching an upper level undergraduate colloquium, in August to December 2014.

2010: Distinguished Visiting Professor at the University of Stockholm, Sweden

Helen Hills has published extensively in her fields, including eight books and over 50 articles.

6) Hills, H., (ed.), Rethinking the Baroque, Aldershot: Ashgate, 2011. 243pp. 25 col. pls. 40 b&w ills.With essays by leading scholars from art history, philosophy, literature studies to reconsider the potential of ‘baroque’ (Mieke Bal, Andrew Benjamin, Howard Caygill, Tom Conley, Alina Payne). With support from the Paul Mellon Centre for Studies in British Art for the plates in colour.‘This book’s greatest contribution is that it prompts historians of Baroque art and architecture to look again at the term and its implications, and with the aid of Deleuze’s ‘fold’ reassess the period through the prism of its very construction and history as an archive worthy of study.’ (Burlington Magazine).'Rethinking the Baroque from a serious, scholarly point of view, is a well- needed enterprise, and this collection of essays by some of the most important thinkers of our time marvelously tackles the task. (Renaissance Quarterly). ‘Hills’s purpose in assembling such a vibrant and diffuse collection of essays on the baroque was to ‘trouble the smooth waters of a linear historicism’ (p. 91), and this collection certainly succeeds in doing that and building on Walter Benjamin’s complicating notions of historical time and the nature of fate, as well as expanding understandings of baroque culture and rejecting early modern pre-eminence.’ EV Devlin (Univ of Cambridge), The Seventeenth Century 28:1, 100-103: http://dx.doi.org/10.1080/0268117X.2012.760948

5) Invisible City: The Architecture of Devotion in Seventeenth-Century Neapolitan Convents, Oxford University Press, 268 pp.44 b. & w. & 10 col. plates. 2004. Best Book Prize, 2004, Society for the Study of Early Modern Women, USA; Weiss /Brown Award in support of outstanding works of scholarship of European culture pre- 1700, The Newberry Library, Chicago. Widely and favourably reviewed in academic journals in the UK, USA and Italy, including Napoli Nobilissima (‘indispensable’); Women’s Art Journal; Rivista Storica Italiana; Reviews of New Books (‘Hills’ extraordinary study is a nuanced and innovative incarnation of the secular city from its sacred recesses that should have broad appeal and wide-ranging influence. Invisible City is a brilliant, stunning book’); Church History (‘a very important exploration of the complex nexus between sacred architecture, gender relations, and lineage politics…wonderful’), Renaissance Quarterly; Confraternitas (‘a meticulously researched and well-crafted analysis of the complex interrelationships between gender, social class, and monastic architecture […] What results from this masterful synthesis is a model for excavating the complexities of premodern convent life and suggestions of intriguing possibilities for future research’), Urban History (‘pioneering’); and the Institute of Historical Research on-line book reviews (‘marvelously interesting’). Reviewers noted that the book will stimulate scholarship in its own and related fields and approaches.

Impact (a): This book formed the inspiration for Clausura Sconfinata, a performance of contemporary dance and early modern conventual music, directed by Julia Pond, performed by the prestigious New York dance company, the Isadora Duncan Dance Company and the Cappella Artemisia (an early modern music ensemble based in Bologna, Italy), world-premiered in Narni, Italy in 2009 and subsequently performed elsewhere in Italy.

Impact (b): This book is cited as inspiration for Sarah Dunant's award-winning novel Sacred Hearts (Virago, 2009) 'A masterfully created tale of convent life' (The Guardian).

4) P. Gouk & H. Hills (eds), Representing Emotions: New Connections in the Histories of Art, Music and Medicine, Aldershot: Ashgate, 2005. ‘important […] well-ordered, well-edited, and contemplative about its role in the production of histories of emotions’ (Medical History), and as having ‘more riches here than I am able to describe’ (Sixteenth Century Journal).

3) Helen Hills (ed.), Architecture and the Politics of Gender in Early Modern Europe, Aldershot: Ashgate, 2003. ‘Pioneering’ in proposing that ‘the built environment is a more fruitful subject of enquiry for gender (than painting), arguing that architecture organises all aspects of life spatially through the body’ (Urban History). The Women’s Art Journal noted this collection as ‘innovative’, and that I brought together all the leading authors in this area.

In 2020 Helen Hills was awarded a prestigious British Academy Conference Award to hold an international conference on silver (at The Goldsmiths’ Company, London: 26-27 July 2021 — COVID-19 permitting). It will bring together scholars from across the humanities and social sciences, curators, silversmiths and artists to rethink the role of silver in the early modern world.  Mined in the ‘New World’ in brutal conditions, silver came to coat the powerful elites of Europe with a shimmering carapace. In travelling from Potosí across the Atlantic Ocean to Europe, silver changed appearance, language, and disciplinary field — in short, it changes epistemologically — and the affect and politics of silver fall out of the picture in an inert ‘finished’ object. These scholarly effects are inter-related, and they are political in their conventional denial of a politics. The conference will lead to a book, edited by Hills, to be published by the British Academy.

A Leverhulme Research Fellowship for Silver: Surface and Substance (2018 to 2019) supported a new project investigating silver and its affective politics in relation to Spanish colonialism on both sides of the Atlantic.

Hills is participant in a multi-university interdisciplinary symposium series at the University of Michigan, New York University and Tulane University, on the topic of 'horror and enchantment' (PDF

Helen welcomes inquiries from potential Ph.D students eager to study these or related topics. She also welcomes Postdoctoral Research fellows and European Marie Curie Fellows who are undertaking research in any area connected to her own research interests.

Helen served on many PhD committees at the University of North Carolina at Chapel Hill, and supervised successful completion of PhD Baroque Examinations of a further 14 students. In the UK she supervised: 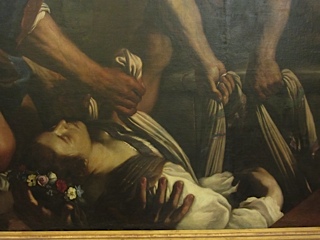 Helen Hills has published widely on baroque theory, Italian baroque architecture, urbanism, sculpture and painting, art and architecture of Naples, southern Italian art and its political, cultural, and academic marginalization; meridionalismo; the history of affect and emotions; gendered religious devotion and social class; women’s voices and architecture; postindustrial cities; architectural theory; reflections on the writing of architectural history; the operation of visual culture across early modern colonialism, including colonialism within Europe; sanctity and the forging of place.

Helen has taught at all levels at the Universities of Keele and Manchester in the UK, the University of North Carolina at Chapel Hill in the USA, and Queen’s University, Kingston, Canada.

Students in Helen's Museology tutor group at the Bar Convent. 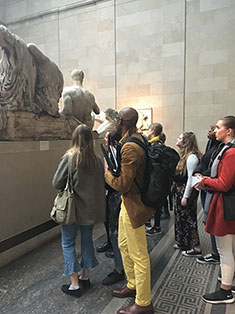 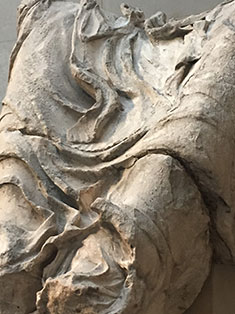 Students in Helen's Marble module observe the brush stroke of paint on the Parthenon marbles and enjoy their ravishing beauty. BM, April 2018. 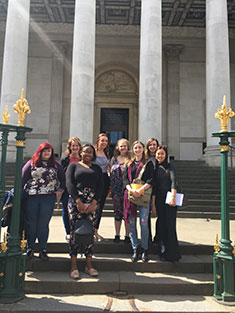 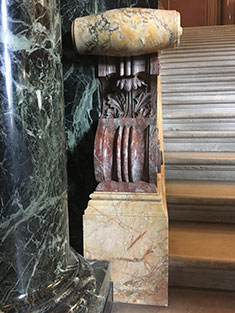 'Marble' seminar breaches a bastion of male class privilege. May 2018. 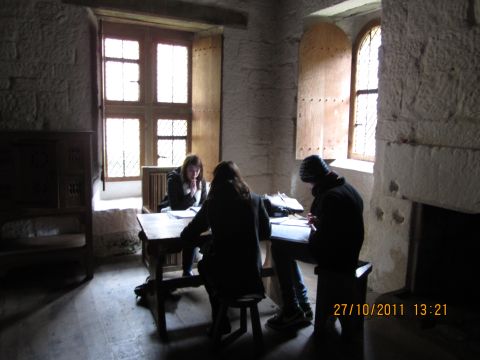 Helen welcomes inquiries for potential PhDs in line with her research interests. She is also happy to host Postdoctoral Researchers and European Fellowships for established reseachers with similar interests.

Bogan Cornea, one of Helen's PhD students, recieves a prize for his presentation on his PhD topic at the Humanities Research Centre, University of York, in July 2014 (photgraphy Ian Martindale).

Two of Helen's PhD students at a research event she ran at Compton Verney.

I have presented papers at many national and international conferences and institutions including: