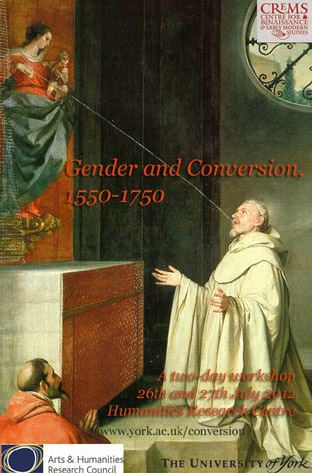 Stories of conversion and religious change have become increasingly central to the literary, historical, and art historical study of the early modern period, yet -- with a few important exceptions -- scholars have paid little attention to the particular ways in which sexed identity inflected the experience of faith, or how men and women renegotiated discourses of gender and proper behaviour as they shifted confession, sometimes crossing both geographical and linguistic boundaries, and encountering new cultures, customs, and expectations.

This two-day symposium will bring together leading academics whose expertise spans questions of gender, religious belief, identity, and narrative form in order to explore discourses of family and gendered relations, and the staging of conversion as a personal or public event. Participants are invited both to uncover and to challenge the scholarly, literary and historical conventions which link femininity to the home or convent and masculine identity to travel, trade, and colonial encounters. Together, we will create new methods and paradigms to uncover and describe the work done by religion and sexed experience in creating ideas of 'masculine' and 'feminine' dress, identity, behaviour, and practice.

Symposium attendees will be invited to read pre-circulated draft chapters which will appear in an edited collection on the theme of Gender and Conversion: Religious Change and Sexed Identity in Early Modern Europe, and to discuss their lessons and development in a series of themed panel sessions.

All are welcome to attend the symposium, but delegates are required to register in advance, and to read the papers prior to attending. There will be a small charge for external delegates of £30 to cover the cost of coffees and lunches. Participants will be having drinks, followed by an informal dinner, on the Thursday evening. To register, please email conversionnarratives@york.ac.uk. Payment can be made in advance or on the day, by cheque or cash.

The symposium is divided into four sessions, grouped thematically, each addressing most directly three draft chapters, but bringing the other materials and contributions into conversation. We will open each
session by workshopping the three chapters (with brief introductory comments from the authors), before discussing the more general themes and questions they provoke, guided by a respondent. Additional themes will emerge throughout the sessions, and be the subjects of a final round-table discussion.

Tea, coffee, and breakfast goods will be available from 9.45 on Thursday and 9.30 on Friday.

‘I wish to be no other but as he’: Tyranny, Masculinity and Conversion in Early Modern Travel Writing and
Drama
Chlöe Houston

Whatever happened to Dinah the Moor? And other questions about gender, race, and the replicability of Protestant saints
Kathleen Lynch

Panel 3: Women and the geographies of conversion

A Father to the Soul and a Son to the Body: Gender and Generation in Robert Southwell’s ‘Epistle to His Father’
Hannah Crawforth

‘The needle may convert more than the pen’: Women and the Work of Conversion in Early Modern England
Helen Smith

The conference will take place in the Berrick Saul building on the Heslington West campus (main campus). For details of how to get to York, please see http://www.york.ac.uk/about/maps/campus/. Delegates may wish to book accommodation on campus, or to visit the useful Visit York accommodation site for city centre accommodation (around half an hour from the campus).