The indicators are designed to help local NHS managers reduce potentially avoidable A&E admissions arising from social inequality, and were developed by researchers at the Centre for Health Economics.

The indicators focus on emergency hospitalisation for patients with long-term conditions such as dementia, diabetes, respiratory and cardiovascular diseases, which previous research has shown can be reduced by more effective primary care and outpatient care.

The indicators have just been rolled out as part of the NHS Clinical Commissioning Group Improvement and Assessment Framework. They show large differences in inequality performance between different clinical commissioning groups across the country, and that between April 2015 and April 2016 there were 264,000 of these excess hospitalisations associated with socioeconomic inequality.

The results show that this variation occurs regardless of the deprivation of the area for example Liverpool CCG which appears on the worst performers list and Tower Hamlets CCG and Portsmouth CCG which appear on the best performers list each serve some of the most deprived neighbourhoods in the country. Similarly for more affluent areas of the country South Cheshire performs badly on inequalities with an indicator value of 1316 excess hospitalisations per 100,000 population whilst East Surrey CCG performs well appearing in the top ten list.

Researchers at the University of York have developed an online tool to allow members of the public to explore inequalities within their CCGs for themselves available at: http://www.ccg-inequalities.co.uk/ 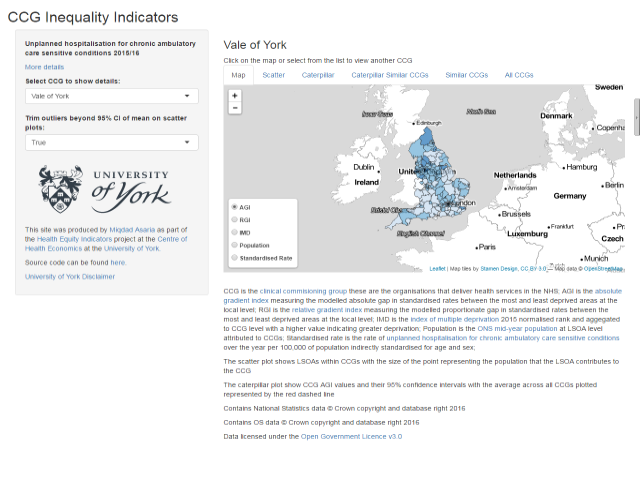 Social inequalities in potentially avoidable emergency hospitalisation impose large and rising costs on the NHS, as well as raising important concerns about social justice. For the first time, NHS managers can now find out how well their local CCG area is doing in tackling these inequalities, compared with similar CCG areas, and see how these inequalities are responding to local healthcare initiatives.  This will help NHS managers learn about the best ways of reducing costly health emergencies associated with social deprivation.

Articles appeared in the Guardian and the Independent on Saturday 20th August 2016.

The NHS Indicator can be found at: http://www.nhs.uk/Scorecard/Pages/IndicatorFacts.aspx?MetricId=463