CAHR marks its 10-year anniversary with a celebratory booklet

In celebration of our tenth anniversary we have published a booklet telling the story of where we have come in the 10 years since we started in 2007. 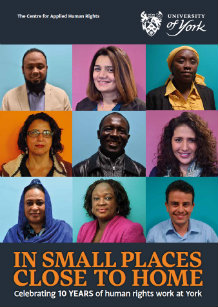 Since it was established in 2007, the Centre for Applied Human Rights has had 24 staff, taught 351 postgraduate students, hosted 34 Chevening scholars, been supported by 58 volunteers, had 15 Advisory Board members, hosted 75 human rights defenders from 44 countries, been funded by 25 funders, and has hosted one academic journal. More hightlights and reflections on the Centre's past and future work in human rights can be found in our anniversary booklet, In Small Places Close to Home - Celebrating 10 Years of Human Rights at York (PDF