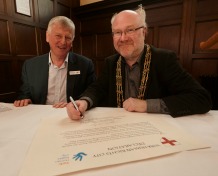 The declaration was the result of six years of work and campaigning, and had the support of all the main political parties within the Council.  We were delighted to be joined by Cllr Thomas Rakajovics from Graz, Austria. Graz was declared Europe’s first Human Rights City over 15 years ago.

We hope the declaration will drive more individuals and organisations to approach issues such as housing, living standards, education, inequality and health and social care through the lens of human rights. York: Human Rights City will seek to support such approaches where we can.

We believe that this declaration will have both local and national significance as we encourage people to further engage with human rights and connect with other cities and initiatives that are also pursuing similar objectives – to make cities and towns more vibrant, diverse, fair and safe places to live, work and study.