Juliana Mensah has recently joined the Centre as the Leverhulme Trust artist in residence. She will be hosted by the Centre throughout 2013 and will deliver a number of creative initiatives. 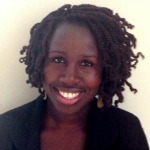 Juliana Mensah is currently delivering creative workshops with human rights defenders on CAHR's Protective Fellowship Scheme. She will participate in and lead elements of the Cultures and Human Rights Practice MA Module. Later in the year she will lead the artistic strands of the York Human Rights City Project in partnership with Andrés Jaroslavsky. This will include human rights book groups and creative writing challenges; schools workshops as part of the Chocolate and Human Rights Festival; and a short story competition. Finally, Juliana will be given time to dedicate to her independent practice and to develop work that is influenced by her time at CAHR.