A project aimed at helping residents of a township in Mozambique to 'future proof' their community against climate change, in which the University of York played a key role, has been recognised by the United Nations. 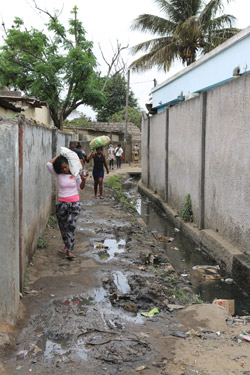 The UN declared the Public Private People Partnerships for Climate Compatible Development (4PCCD) project one of the 2013 Lighthouse Activities under its Momentum for Change initiative.

A partnership led by University College London and involving the Centre for Applied Human Rights (CAHR) at York, Reading University and the Mozambique government organisation FUNAB, developed the project. It enabled residents in the township in Maputo to devise a blueprint for local development under climate change. Community representatives have now started negotiations with government institutions and the private sector to implement the proposals.

Dr Jonathan Ensor, of CAHR at York, said: “It is wonderful news that the project has been recognised and we are privileged to have played a part in its genesis. The project has demonstrated both the capacity of the poorest local citizens to play a central role in local planning and their resourcefulness in ‘future proofing’ their neighbourhood against climate change. This project illustrates how respecting the rights of the world’s poorest people is a critical step in ensuring they can respond to climate change.”

UN Framework Convention on Climate Change Executive Secretary, Christiana Figueres, said: “The 2013 Lighthouse Activities are true beacons of hope, demonstrating what happens when innovation and passion come together to address the biggest challenge of our time. There are thousands of examples of people taking action to address climate change all over the world.

“The Lighthouse Activities highlight some of the most practical, scalable and replicable examples of what people, businesses, governments and industries are doing to tackle climate change, which I hope will inspire others to do the same.”

The project is one of 17 Lighthouse Activities selected by a 16-member, international advisory panel as part of the Momentum for Change initiative. The initiative is funded by the Bill & Melinda Gates Foundation and the Rockefeller Foundation, and operates in partnership with the World Economic Forum.

The activities will be showcased during the UN Climate Change Conference in Warsaw, Poland (11-22 November). Stakeholders can interact with the activity representatives during two social media discussions ahead of the climate conference. A Twitter chat takes place on 6 November from 16:00 to 16:30 (CET). Participants can join in using the hashtag #m4c. A Google Hangout will take place a week later on 13 November.

High-resolution images of each of the 17 Lighthouse Activities are available at: https://www.dropbox.com/sh/md77sbijzm5f3jz/metZ3E8kvO