CAHR’s Protective Fellowship Scheme for human rights defenders (HRDs) at risk normally runs from September to the end of March. In 2020, the fellowship was cut short due to the Covid-19 pandemic, the impact of which was starting to be felt in the UK in the middle of March. Instead of undertaking a scheduled advocacy and networking visit to London, the HRDs needed to return home on an expedited schedule – in most cases racing to book onto increasingly sold out flights in order to reach home before the borders closed. It was a time that showed how HRDs, even when they know they are returning to risky and outright dangerous situations, want to be working in their communities, particularly at a time when they know they are needed more urgently than ever.

When Tajik human rights lawyer Dilrabo Samadova was about to check-in to her flight home from  Manchester Airport on Sunday 15 March, she was turned away from the flight by the airline due to having recently visited  Germany, a Covid-19 hotspot. She had to rebook on another flight not flying via Istanbul later in the week. On Thursday 19 March, 10 minutes before she left her house in York, Dilrabo read the news that the Tajik Government was going to cancel all flights from 20 March at 00:00. Her flight was going to arrive in Dushanbe on the 21st at 04:40. Since this was her last chance to get home, she decided to travel to Manchester anyway and ask the airline about her options.

In the train on her way to Manchester, Dilrabo took action like only a human rights defender would. It is a case study of how important networks are for successful human rights action. Dilrabo started by contacting her friends in Moscow, including the head of the Tajik diaspora, and asked them about the situation of the migrants who were planning to go home for Navruz (Tajik new year) celebrations and because of the coronavirus. She learnt that more than 200 migrants were stuck in one of Moscow’s airports, more than 300 in Prague, around 150 in Istanbul, and one in Manchester (herself). Dilrabo then offered to mobilize everybody to write letters to the President of Tajikistan to urge him to fulfil Tajikistan’s human rights obligations, and to contact journalists about the situation of the Tajiks stuck at airports.

Dilrabo personally wrote letters to the President, the Ambassador of Tajikistan to the UK, and the Minister of Foreign affairs reminding them of their human rights responsibilities, including the freedom of movement to travel home, describing the difficulties people unable to return home were in. She and colleagues involved journalists and mass media in the campaigning, and as a result, in the morning of Friday 20th, the Tajik government announced that three flights from Moscow, Istanbul and Dubai (where Dilrabo transited) were going to be allowed to cross the border for the last time in March. Dilrabo’s action helped around 600 citizens get home - directly to quarantine, but in their homeland.

When Dilrabo arrived in Dushanbe, the whole flight was taken directly into quarantine in a mountain resort for 14 days. During her quarantine stay, Dilrabo published a quarantine diary every evening, chronicling the days in the camp, and the state’s inadequate preparation for the pandemic while instead focusing on Navruz celebrations.

While in quarantine, Dilrabo inspired her colleagues and her organisation’s volunteers to start a charity fundraising campaign to help elders, orphans and low-income families to prepare for the quarantine and the pandemic. Through crowdfunding they have now sourced funds for 70 low-income families, with a goal of 500 families. Through infographics published in Tajik, Russian and Uzbek they have also informed people on how to protect themselves from Covid-19, and to recognise the symptoms. Dilrabo says, “I coordinated all these initiatives sitting in a quarantine camp and my marvellous colleagues and our volunteers did all the real and difficult jobs - I am very happy and lucky to work with such a team!”

The Covid-19 crisis has highlighted across the world the importance of the work conducted by HRDs. Dilrabo’s story emphasises the significance of networks in times of crisis, and what it is possible to achieve when we work together – and that things can be done even from quarantine! 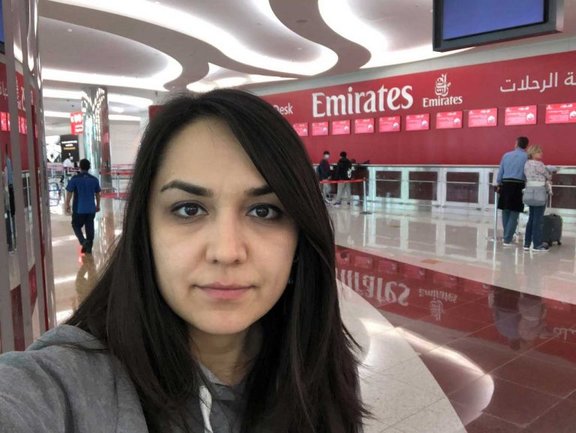