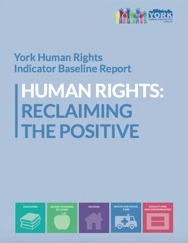 The York Human Rights Indicator Baseline Report is the result of an Economic and Social Research Council (ESCR) grant with support from the Joseph Rowntree Foundation and Joseph Rowntree Charitable Trust.

Working with post-graduate students from the Centre for Applied Human Rights (CAHR), staff from the City of York Council and International Service, we were able to identify pieces of York-specific data, which measured on an annual basis, will allow us to measure the progress being made in York to protect and fulfil priority human rights, as identified by people who live, work and study in the city.

Furthermore, this report is intended serve as a means of providing focus to discussion and debate about human rights in York and a platform for local advocacy. In working more closely with organisations, the report serves as a means to both highlight the positive human rights stories in York and the areas where further attention and advocacy is required.

Themes that emerge from the 2016 baseline report are the progress that has been made in some area of the right to health and social care, the right to education and the right to housing, but as well the lack of continued progress under the right to a decent standard of living. The theme of inequality echoes the findings of other national reports, including that of the Equality and Human Rights Commission. For example, inequality can be seen the attainment gap between disadvantaged pupils and the peers which was larger than the national average in 2014/15 (but an improvement on data available for the previous year).

The right to equality and non-discrimination, protected under the Human Rights Act 1998, is a cross-cutting right, and through greater disaggregation of data and the inclusion of qualitative data in subsequent reports, we will be able to better monitor the enjoyment of human rights across wards and demographics in York.