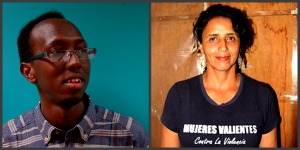 Dina Meza from Honduras and Abdiaziz Abdinur Ibrahim from Somalia were two of the three journalists to be awarded the Oxfam Novib/PEN International free expression award in The Hague on Thursday 16 January. Dina Meza was a visiting fellow on the Centre's Protective Fellowship Scheme for Human Rights Defenders at Risk in spring 2013, and Abdiaziz is currently based in York, as a participant on the scheme since October 2013.

Dina thanks the Centre for support and says: "My stay in York contributed to the visibility of my work and hence to this award."

Abdiaziz says: "I am very happy to be one of the winners of 2014 Oxfam Novib / PEN Free Expression Award. The award is not only developing my work but also gives inspiration to my fellow journalists who are doing their work bravely, as the award recognizes the efforts to maintain the spirit of freedom of expression. Thanks to Oxfam Novib, PEN International's Writers in prison committee and Pen emergency fund. For this opportunity I would also like to thank the Centre for Applied Human Rights for strengthening my career and knowledge and recognizing my work, the Center's Protective Fellowship Scheme for Human Rights Defenders at Risk opens us new doors to keep practicing human rights work."

The Centre for Applied Human Rights congratulates both Dina and Abdiaziz on receiving the award.