The changing nature of dogs in (post)medieval England: a bioarchaeological study of treatment, health, size, and diet across human social contexts.

Dogs, the first domestic species, have become a ubiquitous presence in most human societies across the world. More than half a billion are estimated to be alive today: they are pets, pests, and helpers; companions and possessions; resources and disease vectors. And yet the development of the human-dog relationship in historical time is poorly understood, archaeological research having focused on prehistoric origins or on specific cases of post-mortem treatment. This research will address this gap for medieval/post-medieval (mid-Saxon to Victorian) England, using zooarchaeological data systematically to track changes in roles, status, and treatment of dogs, over time and between social contexts.

The project has four methodological strands, each employing both new and legacy data:

Post-Mortem Treatment of dogs reflects human perceptions of dogs in general, but also the status of individual dogs. I will collate data on Associated Bone Groups (ABGs; groups of 3+ articulated elements) and reported cases of butchery and other modifications, and conduct detailed (re)analysis of the latter at key sites.

Pathology: healed trauma can indicate activity and/or mistreatment but also subsequent care; dental calculus, oral pathologies, and nutritional deficiencies are linked to diet; evidence of infection can indicate extended care or neglect of infirm animals. I will collate reported instances of pathology and conduct systematic (re)analysis for ABGs and cranial specimens at key sites.

Size of dogs relates both to selective breeding and to nutritional factors. I will track size over time and between site types to detect overall trends and the potential emergence of discrete morphotypes.

Dietary Stable Isotope Analysis (carbon and nitrogen) of bone collagen reveals aspects of past diet. I will compare dog isotopic values with those of humans, domestic herbivores, and (where possible) commensal rats to assess the relative dietary position of dogs.

Prior to this PhD, I studied Archaeology at the University of Central Lancashire through an undergraduate integrated masters course (MSci, Distinction) between 2012 and 2016. During my undergraduate studies began to specialise in zooarchaeology, analysing the animal bone assemblage from the early Anglo-Saxon cemetery site at Oakington, Cambridge. This research formed both my third year research project; exploring the faunal remains interred with humans at the cemetery, and later, my dissertation, examining the broader use of animals at the site.

Through 2016-17 I sought to consolidate my understanding of zooarchaeology through the University of York’s MSc Zooarchaeology degree in 2016-17, a course I was able to complete through obtaining funding from White Rose College of Arts and Humanities. Here my focus shifted towards integrating biomolecular methods with standard zooarchaeological practices. This culminated in a dissertation project wherein I utilised stable isotope analysis in conjunction with the standard zooarchaeological recording of a 14th Century sub-assemblage of Atlantic Hake (Merluccius merluccius) remains to establish their provenance, and by proxy, the possibility of their trade.

The PhD sees me return to the branch of “social zooarchaeology”, delving into past dynamics between humans and animals, augmenting biomolecular methods in my research to expand the avenues available when exploring past animal populations.

This PhD is made possible by AHRC funding through the White Rose College of the Arts & Humanities (WRoCAH), to whom I am most grateful. 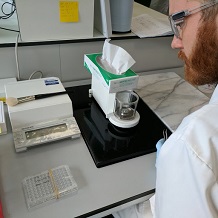