After completing my undergraduate studies in Communication and Media Science, English and Journalism at Leipzig and Cardiff, and a Master’s in comparative literacy studies, I became fascinated with how we have told the stories of science.

My doctoral research explored the emergence of Psychology, and fantasy literature in the Victorian age as sister phenomena. I revisited the biographies of some who we now consider some of the most prominent fantasy writers of the age and their work and thinking as scientists, and how it was the language and imagination of fantasy that gave psychology – not only – its linguistic vehicles for making sciences breakthrough discoveries, including evolutionary psychology, or dreaming, imaginable and understandable to scientific and public communities well beyond their time. This illustrates the sociological function, and workings of imagination and fantasy in society in relation to our understanding of science.

I joined the university of York and the ECLAS project on Science and Religion narratives, where I have explored such themes in the communication surrounding the Covid-19 crisis, and how its influenced our understanding of the science of the virus, risk and how it influenced also our behaviours. I am currently exploring the effects of polarising narratives in the context of environment, ecology and AI.

Besides my academic work, I have with the Royal Entomological Society, to make relatable and understandable the impact of current mass extinction of insects, and with museums, schools and the media to demystify the presence AI and automation in society, exploring the long history the concerns connected to them, where they come from, and how much of that is routed in scientific reality, or narrative.

I have worked as a journalist (I have acted as correspondent for WDR Radio Germany on matters of Brexit and Covid-19), and as translator (amongst others for Marvel comics), and appear regularly as an expert and public speaker on radio and television.

I am the editor of The Lewis Carroll Review, and reviews editor for the British Society for Literature and Science, for which I am also an executive committee member.

My research is primarily interested in science, imagination, communication and society. I hold not only a scholarly interest but deep conviction crucial significance of storytelling and fantasy in our lives, but for that we first need to acknowledge its presence and mechanisms.

My research publications cover the History of Science, especially psychology, literature, and its intersections with visual culture, from illustration to games and comics, Public Understanding of Science and Science Communication, Communication and Media Science, as well as literary and narrative studies. 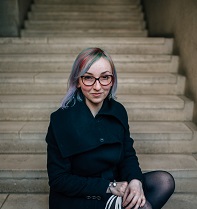