Air pollution remains a major environmental, health, and policy challenge in both developed and developing countries, particularly those that are rapidly urbanizing. The Global Burden of Disease Study estimates that poor air quality (AQ) from exposure to both indoors and outdoors sources is responsible for the premature death of 5.5 million people worldwide annually (Forouzanfar, M. H. et al., 2015).

This project ran from July to December 2015, funded using SEI Seed and Innovation funds provided by SIDA. The aims of this project were to:‌

i) perform a pilot study on monitoring of indoor and outdoor PM levels use personal mobile monitors in a key informal settlement of Nairobi (Mukuru) using six 'community champions' selected to represent different ages, genders and occupations from within the informal settlement and

ii) work with the community champions to communicate about the results of the study to other local residents, policy-makers including local government officials, and other researchers working in the area. We aimed to assess levels of knowledge and people's understandings of air pollution and see whether this changed over the course of the project.

In addition, the project aimed to exchange knowledge between the SEI York centre with its expertise in air pollution and citizen science, and the SEI Africa centre with its expertise in engaging communities and city planning in order to build capacity at both centres. Since this project we have had two further funded in this area and another looking at similar approaches in Addis Ababa, Ethiopia.

One of the most important outcomes from the project was the creation of the Kenya Air Quality Network which was established as a result of a workshop held during the project. Policy-makers and other local stakeholders valued the opportunity to find out about air pollution from community members directly, and so decided to form a network with the aim of exchanging information and having collective action around research, engagement, education and public awareness. SEI Africa is the secretariat of this network which meets quarterly.

The picture below shows one of the community volunteers with sensor back-packs. 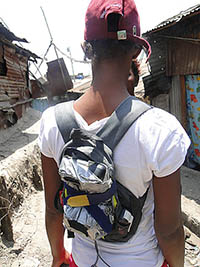