The centenary of the abdication of Tsar Nicholas II of Russia

David Moon, Anniversary Professor in History at the University of York, looks back at the career of Russia's last emperor.


Nicholas II in custody at a palace outside Petrograd after his abdication via: Library of Congress Prints

‌On 15 March 1917 (according to the western calendar) Tsar Nicholas II abdicated from the Russian throne. This brought to an end the Romanov dynasty that had ruled Russia for over three hundred years. The end was sealed in a short document in which Nicholas explained:

"Internal popular disturbances threaten to have a disastrous effect on the future conduct of this persistent war.... We have thought it well to renounce the Throne of the Russian Empire and to lay down the supreme power."

The ‘internal popular disturbances’ were the events now known as the ‘February Revolution’ (according to the calendar then in use in Russia), in the capital city which at the time was called Petrograd (formerly and once again since 1992 St. Petersburg). Strikes by the city’s workers, protests by women over bread shortages, wider discontent among the population escalated into revolution when some army units in Petrograd mutinied and went over the side of the protesters.

The situation was especially serious since Russia was fighting, and losing, ‘this persistent war’ with Germany on the Eastern Front of the First World War. Since 1915, Nicholas had been the Commander-in-Chief of Russia’s armed forces and thus the continuing defeats reflected on him personally. Nicholas was persuaded to abdicate by the army high command, conservative members of the Duma (parliament), as well as some of his own relatives. They thought that if they removed the tsar, who had become unpopular among large sections of the population, they could put down the revolution on the streets of the capital and then focus their efforts on fighting the war.‌


Demonstration in Petrograd during the February Revolution via: State Museum of Political History in Russia

They were proved badly wrong. Several months uncertainty followed under a ‘provisional’ government, which lacked the authority and power to address the serious problems facing Russia, and culminated in the seizure of power by the extreme left-wing Bolsheviks under Lenin in October 1917. This ushered in 74 years of Communist rule in what became the Soviet Union.

Historians have long debated the causes of the two revolutions in Russia in 1917. Were they the consequence largely of the crisis created by the First World War? Or were they the culmination of longer-term tensions resulting from several decades of social and economic modernisation, while the tsars tried to cling onto their power?

In this centenary year historians around the world are continuing to debate the causes and significance of the Russian Revolutions. In the post-Soviet Russian Federation, however, commemorations are muted since the Russian government, perhaps understandably, has mixed attitudes to the events of 1917. (See ‘Revolution? What Revolution?’ Russia Asks 100 Years Later’, The New York Times, 10 March 2017, by Neil MacFarquhar).

Nevertheless, the head of the Russian TV channel ‘Rain’ has set up the Project 1917 website that uses contemporary letters, diaries, memoirs and other sources to give us an immediate sense of the unfolding drama of the revolutions.

In Britain the Royal Academy of Arts in London is hosting a major exhibition that ‘explores one of the most momentous periods in modern world history through the lens of [Russia’s] groundbreaking art.’ 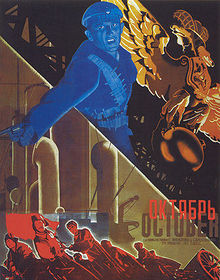 An original film poster that was released in 1928 and designed by V. Stenberg, G. Stenberg, Y. Ruklevsky via: Wikipedia ‌

Russia’s revolutionary history can be explored through the resources held in the University Library.  You can find books on the revolution and the Tsar, as well as a collection covering art in the early years of the Soviet Union. Many of the artists featured in the Royal Academy’s exhibition are well represented in the Library’s holdings.

Along with books on the history of the Russian Revolution, the University Library also has a range of DVDs and books on the celebrated Russian director, Sergei Eisenstein.  Eisenstein directed the 1928 silent film October, a dramatisation of the 1917 October revolution.

To find material on any of the subjects mentioned, search YorSearch, our Library catalogue.

This story was originally posted on the Information Services blog.