In October 2012 the Department of History of Art at the University of York joined the research project SPECTRUM-Visual Transalations of Jerusalem, which is funded until April 2016 by the European Research Council and based at the Hebrew University of Jerusalem. The project documents and examines visual translations of Jerusalem across Europe, including such famous examples as the Temple Church in London or the Sacri Monti of Piedmont and Lombardy, but also a multitude of lesser-known sites which have hitherto been studied only at a regional level. The research group at York focuses on Jerusalem translations in Great Britain and the Low Countries, as well as on Western medieval maps of Jerusalem.

Dr Hanna Vorholt is an Anniversary Research Lecturer at the Department of History of Art, University of York. Before joining the Department in 2012, she held positions or fellowships at the Max Planck Institute for History, the Fitzwilliam Museum, Cambridge University Library, the British Library, and the Warburg Institute. She is Co-Investigator of the AHRC-funded project ‘The Production and Reading of Music Sources’ and leads the ERC-funded research group at York on the topic of translations of Jerusalem in Great Britain and the Low Countries. She is currently preparing a book-length study of Western medieval maps of Jerusalem from c.1100 to 1450 and has co-edited the volumes Imagining Jerusalem in the Medieval West [= Proceedings of the British Academy 175] (Published for the British Academy by Oxford University Press, 2012) and Visual Constructs of Jerusalem [Cultural Encounters in Late Antiquity and the Middle Ages 18] (Turnhout: Brepols, 2015).

Dr Laura Slater completed her AHRC-funded PhD in History of Art at King’s College, University of Cambridge. In spring 2012, she held a Visiting Research Fellowship at Trinity College Dublin as part of the 'History Books in the Anglo-Norman World’ project, funded by the Marie Curie Programme (FP7) alongside Trinity Long Room Hub and Trinity Irish Art Research Centre (TRIARC). She joined the University of York as a Postdoctoral Research Fellow on the ERC-funded project from October 2013 until April 2015 and is now Research Affiliate on the project. Her research focus for this project is a study of the medieval Westminster Abbey and Palace complex, alongside wider investigations into the political significances of European Jerusalem sites. Her research interests centre on the relationships between art, ideas, power and politics in medieval Britain and Europe.

Team members have also presented papers or chaired sessions at: 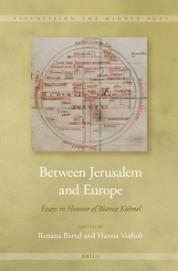 The Politics of Visual Translations of Jerusalem

Hosted by the Department of History of Art at the University of York in association with The Hebrew University of Jerusalem, in the context of the major ERC-funded-research project ‘SPECTRUM – Visual Translations of Jerusalem’

The keynote lectures are free to the public. Registration for the 2-day conference is £30 (£15 for students). To register for the conference please visit the Online Registration Site. Registration will close on 10 March 2015. For further information please email Laura Slater.