Funding: c.£410,000 from the Arts and Humanities Research Council 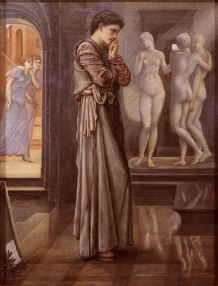 ‌Displaying Victorian Sculpture is a major, three-year collaborative project, funded by the Arts and Humanities Research Council, that seeks to return sculpture to centre stage in discussions of 19th-century British culture, and to re-assert the importance of sculpture to Victorian history.

While Victorian Studies has undergone a remarkable growth in the past two decades, with exhaustive research into many aspects of 19th-century British culture, scholars have almost entirely overlooked Victorian sculpture. Displaying Victorian Sculpture seeks to return sculpture to centre stage, and to re-assert the importance of sculpture to Victorian national and imperial history. The project focuses on the display of sculpture in 19th-century Britain and its colonies, in museums and galleries, public spaces inside and out, and in homes from royal palaces to suburban villas.

Addressing a range of objects from cameo brooches through Parianware statuettes to imperial monuments, Displaying Victorian Sculpture aims to reveal the diverse and significant social life of sculpture in 19th-century Britain; a social life both physical, in its weighty presence in public and private spaces around the world; and conceptual, as aesthetic and moral exemplar and as political art par excellence.

The project is led by the departments of History of Art at the University of Warwick and the University of York, with our project partner, the Yale Center for British Art. It will also involve the participation of three regional collections: Kelvingrove Art Gallery and Museum, Glasgow; National Museums, Liverpool; and National Museum, Cardiff. At the heart of the project is a major international exhibition of Victorian sculpture which will open at the Yale Center for British Art in Autumn 2014 and a major London venue thereafter. The project also funds two PhD theses; three annual workshops, in Glasgow, Liverpool and Cardiff respectively; and an edited collection of primary sources on Victorian sculpture.

The project will deliver a range of internationally-significant outcomes which include:

The project is led by Prof. Michael Hatt at Warwick, and Dr. Jason Edwards at York.

The steering group for the project comprises:

Displaying Victorian Sculpture is a three-year, AHRC-funded collaborative project, led by the universities of Warwick and York, in partnership with the Yale Center for British Art, which seeks to return sculpture to centre stage in discussions of 19th-century British culture, and to re-assert the importance of sculpture to Victorian history. This symposium, hosted by the Sculpture Studies Research School, takes place midway through the project, and presents an opportunity to discuss the research emerging from the project.

16.00 Followed by a roundtable discussion

There is no charge for this symposium. Coffee and a buffet lunch will be provided.

The AHRC-funded Displaying Victorian Sculpture project, in collaboration with the Henry Moore Institute for the Study of Sculpture, has initiated a series of Institute Library Displays which highlight the importance of the Institute’s Archive and Library to the study of Victorian sculpture. These demonstrate the variety of ways in which this invaluable resource informs, problematises and inspires research into the practices, display and reception of Victorian sculpture.

Albert Toft: A Lesson in Modelling and Sculpture

In 1911, the sculptor Albert Toft (1862-1949) published a teaching manual for his students at the Royal College of Art entitled Modelling and Sculpture. Using photographs, illustrations and diagrams of armatures, half-modelled busts, figures and relief panels, Toft’s book was one of the first of its kind to instruct in the various technical processes of the sculptor’s craft. Modelling and Sculpture gives us a rare, detailed insight into the teaching practices at the Royal College of Art at the turn of the century, as well as a wealth of photographs of the sculptor’s own works in progress.

Toft was initially trained in the Potteries, where, in 1881, he won a scholarship to study under Edouard Lanteri (1848-1917) at the National Art Training School in London. Toft’s own sculptural practice and, in turn, his own teaching methods were heavily influenced by Lanteri’s classes, notes from which were published in 1902 as an illustrated three-volume book, Modelling: A Guide for Teachers and Students.

The practical and physical challenges faced by the sculptor are often overlooked by art historians in favour of a loftier understanding of their work. By focusing on excerpts from Toft and Lanteri’s books, as well as images of Toft working in his studio, this display explores the processes involved in making sculpture – from initial sketch, to modelling in clay and marble carving.  It provides a glimpse into sculptors’ training and practice at the turn of the century, highlighting the extent to which sculptors such as Toft had to learn to be anatomists, chemists, engineers and teachers, as well as creative artists.

Richard Westmacott’s Lessons from the Past

This display explores how the work of the sculptor Richard Westmacott III, RA (1799-1872) communicated a history of sculpture through his Handbook of Sculpture, Ancient and Modern, published in 1864. The book was based on sketches and notes Westmacott had produced on a study trip to Italy some four decades earlier, in 1820 and seven years after he inherited his father's role as Professor of Sculpture at the Royal Academy. The Handbook set out to educate sculptors through example. Click here to read more.

The Sculptor Prince? Victor Gleichen and the Sculpture Profession in late-Victorian Britain

Victor Gleichen (1833–91), nephew of Queen Victoria, was a moderately successful sculptor in late-nineteenth-century London. The Henry Moore Institute Archive contains a rare album of photographs showing the contents of the display gallery in his studio in St James’s Palace, London. This material offers an insight into the career of an ‘amateur’ sculptor who used his connections to London’s elite to build a successful professional career. Click here to read more.

William Hamo Thornycroft (1850–1925) was born into a family of sculptors, and was immersed in the practice and business of sculpture from an early age. His surviving notebooks, sketchbooks and books, housed in the Henry Moore Institute Archive, reveal how he extended his sculptural education outside this studio environment by visiting exhibitions and museums, attending classes and lectures at the Royal Academy of Arts, and reading widely on sculpture, costume and design. Click here to read more.

Displaying Victorian Sculpture is a three-year collaborative project between the Departments of Art History at the Universities of York and Warwick, funded by the Arts and Humanities Research Council. It seeks to return sculpture to centre stage in discussions of nineteenth-century British culture, and to reassert the importance of sculpture to Victorian history.

The Henry Moore Institute is a world-recognised centre for the study of sculpture in the heart of Leeds. An award-winning exhibitions venue, research centre, library and sculpture archive, the Institute hosts a year-round programme of exhibitions, conferences and lectures, as well as developing research and publications, to expand the understanding and scholarship of historical and contemporary sculpture.