Jessica N. Richardson is Lecturer in Early Modern Art. Her research and teaching centres on Italian art, c.1300–1550, and its wider transcultural contexts, with particular focus on materiality and aesthetic practices; the links of sacred presence, the supernatural and representation; the performance and agency of art; the reception of ‘medieval’ images in the early modern period. She received her BA in History and Italian Studies from Gonzaga University, an MA in Renaissance Art History at the University of Washington, and an MA and PhD at the Courtauld Institute of Art. Before joining the department in September 2021, she was Assistant to the Director and Senior Researcher at the Kunsthistorisches Institut in Florenz – Max-Planck-Institut in Florence, Italy; Research Associate at the Center for Advanced Study in the Visual Arts, National Gallery of Art, Washington DC; and Amhanson Fellow at Villa I Tatti, The Harvard University Center for Italian Renaissance Studies.

Jessica’s published work and research engages with a broad range of media and theoretical issues, such as temporality in the recontextualization of medieval images in the early modern period; intermediality and the mobility of images (cloth banners, painted panels and frescoes) in the definition of ritual spaces; the performative dynamics of text and the aesthetics and agency of marble. Her books include Remembering the Middle Ages in Early Modern Italy (co-edited with Lorenzo Pericolo; Turnhout, 2015) and The Aesthetics of Marble from Late Antiquity to the Present (co-edited with Dario Gabmoni and Gerhard Wolf; Munich and Chicago, 2021). She is also a contributing author of the collaborative volume, Carlo Cesare Malvasia, Felsina Pittrice: Lives of the Bolognese Painters. Volume One: Early Bolognese Painters, ed. Elizabeth Cropper (London, 2012). Her forthcoming special issue of RES: Anthropology and Aesthetics titled Fashioned from Holy Matter (co-edited with Annette Hoffmann; 2021) explores, in a cross-cultural and interreligious perspective, images created from materials considered sacred, from icons crafted in blood and earth, to Chinese paintings on Bodhi tree leaves and Native American stone sculpture. Her article, ‘Beneath Ground’, analyses the artistic potentials of wood deemed sacred, questioning the ontological relationships between the values ascribed to materials and image-making.

Jessica is completing her monograph, The Prehistory and Making of Miraculous Images in Bologna, c.1100–1650, which presents a corpus of ‘medieval’ images that were deemed miraculous, focusing on their transformations from the fifteenth to the seventeenth century, considering ideas of authorship and sacred presence, temporality and the early modern perception of medieval visual culture. Related to this work, another project looks at the materials of art and the supernatural, c.1300–1550, reflecting on notions of art and making vis-à-vis the natural environment, including images that appear in trees or stones, as well as plein-air rituals and artworks displayed in nature.

Jessica is currently developing modules related to magic, the miraculous and the supernatural in early modern art, as well as on the transcultural entanglements of Italian art from the fourteenth to the early sixteenth century. She welcomes students interested in these topics and/or in late medieval and early modern art in Italy. 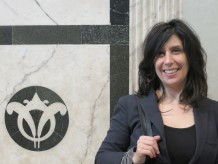