Jerusalem has been a focal point on the stage of world history for centuries and holds an important place in the imagination of people of different nationalities and faiths. This module investigates the legacy of the city from an art-historical perspective and focuses on visualisations of Jerusalem in the medieval West. As part of this investigation, we will explore the history and significance of key sites in Jerusalem itself; consider the ways in which information regarding them was transmitted to the West; and, crucially, how it was then visually translated there within different media: texts, manuscripts, panel paintings, reliquaries and architecture. We will examine the concepts and the symbolism which informed the creation of these visual translations, as well as exploring the cultural, religious, and political contexts of their use. In this way, we will assess the role of Jerusalem in the Western imagination, and the relationship between changing visualisations of the city and broader developments such as the crusades, pilgrimage and contemporary trends in theological study. The main focus will be on the Christian imagery of Jerusalem, but Jewish and Islamic traditions will also be considered. 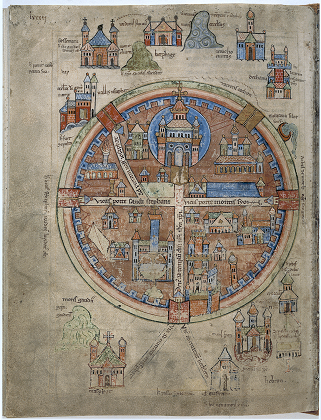