This module focuses on the way in which the medieval world is represented in visual form through maps and diagrams: images which have to this day remained crucial to the organisation, communication and transmission of knowledge. Through the analysis of key examples we will assess how the cosmos was imagined in its overall structure and its individual components (including phenomena such as the movement of the planets, and the relationship between the four elements), and how the known world was visualised in its geographical and historical dimensions. The twelfth and thirteenth centuries witnessed important developments in the way in which this type of knowledge was laid out and visualised, and we will thus begin in the early twelfth century with images in Lambert of Saint-Omer's important encyclopaedia Liber Floridus, and end around 1300 with the famous Hereford and Ebstorf world maps. 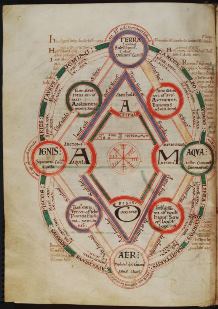