Art and Imagery in York Minster

York Minster is the largest Gothic cathedral in northern Europe. It preserves the most extensive collection of medieval stained glass in Britain, dating from the late twelfth to the early sixteenth century. Its architectural sculpture is of great variety and importance. In its thirteenth-century chapter house it boasts one of Europe’s most remarkable feats of structural engineering, designed to showcase a decorative display of exceptional richness manifest in several media. By the end of the Middle Ages its choir housed the largest late-medieval shrine base in England, while an earlier cult site remained a focus for pilgrim interest. Much of this medieval imagery has survived and further light is shed by the antiquarian record, which is exceptionally rich.
This course will examine some of the surviving iconographic schemes in the Minster, looking not just at the stained glass, but also at the remaining medieval sculpture and monumental paintings so as to give as comprehensive a view as possible of the imagery in the Minster. We will start with the earliest standing part of the building, viz the transepts and chapter house. While following a broad chronological outline, so as to situate the works of art within the architectural development of the building, we shall focus on material which exemplifies the great variety of imagery, both theological and religious, and secular and humorous, within the Minster; and we shall be able to draw on literature which ranges from early antiquarian sources up to a number of very recent studies.

The art and imagery of the Minster will also be considered in relation to other contemporary schemes both at home and abroad. Seminars will be conducted both in the building and in the class-room and we will take full advantage of current conservation projects in order to gain privileged access to some of the Minster’s most extraordinary treasures. 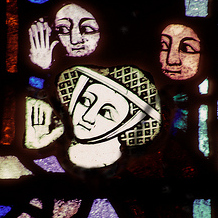