The paintings are listed in the order that they appear in the display at Tate Britain.

1. Parry Walton d.1702.
Still Life before 1686.Oil on canvas.
Lent by the Trustees of Dulwich Picture Gallery, London
Parry Walton was a dealer, restorer, copyist and still life painter.  This is his only known surviving work, attributed to him in the inventory of the Cartwright collection which was bequeathed to Dulwich College in 1686.  The composition and style is reminiscent of the Dutch artist Simon Luttichuys (1610-61) who was active in Britain in the 1630s (where he was known as ‘Littlehouse’) before returning to Amsterdam.  This is perhaps a copy by Walton of a still life by Luttichuys, the original of which is now unknown.

2. Pieter van Roestraten 1630-1700
A Porringer, German Cup and Oysters c.1680
Oil on canvas
Lent by the Victoria and Albert Museum, London. Bequeathed by Lionel A. Crichton 1939
Pieter van Roestraten was a pupil of Frans Hals (c.1580-1666), later marrying his master’s daughter.  He established himself as a still life painter in London in the 1660s and is best known for his depictions of silverware - painting ‘portraits’ of luxury objects.  The centrepiece of this picture is a German tinned and gilt copper two-handled cup and cover (c.1650). Next to this is an English two-handled silver cup or ‘porringer’ (c.1650-80), lying on its side.  This object appears in other works by Roestraten, so was probably a stock item owned by the artist.

3. Pieter van Roestraten 1630-1700
Still Life with Silver Wine Decanter, Tulip, Yixing Teapot and Globe c.1690
Oil on canvas
Lent by the Victoria and Albert Museum, London. Bequeathed by Lionel A. Crichton 1939
Silver decanters were used to serve wine, but by the 1690s had been superseded by the use of lead glass. The function now redundant, their value laid in their display of material wealth.  The example shown as the centrepiece of this picture is probably Dutch from around 1690.  A red stoneware teapot is prominently positioned alongside it, the drinking of tea becoming fashionable among the wealthy at this time.  The globe in the background reminds us that many of these exotic new and expensive items were arriving via trade from distant places, including tea from China.

4. William Gow Ferguson c.1633-1695
Still Life 1684
Oil on canvas
Tate. Purchased 1955
William Ferguson is thought to have been born in Scotland but was active as a painter in the Netherlands. This picture is an example of his many arrangements of dead birds and animals – known as the ‘gamepiece’. The two main specimens in the centre of the composition are a partridge (left) and magpie (right), both birds commonly eaten in the 17th century.  The hunting equipment on the left remind us that this is a statement of wealth and social status, hunting being the preserve of the elite. 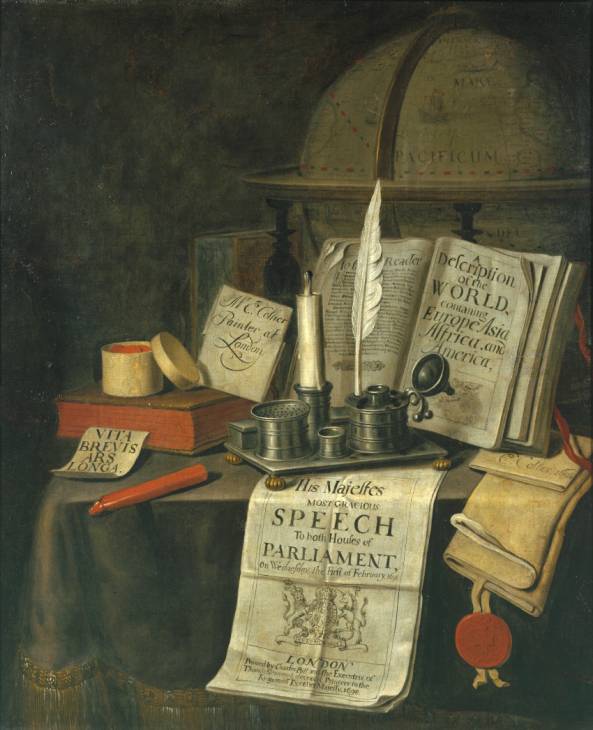 5. Edward Collier c.1642-1708
Still Life with a Volume of Wither's 'Emblemes' 1696
Oil on canvas
Tate. Purchased 1949
The Dutch painter Edward Collier lived in Leiden and Amsterdam, but was active in London from 1693. He is particularly known for his vanitas still lifes which warn against the lure of material wealth and earthly desire. While the musical instruments, wine and jewels represent the fleeting pleasures of life, the skull and hour-glass symbolise the inevitability of death. In the top left corner a funerary urn holds in place a piece of paper with a Latin inscription which comes from the Old Testament book of Ecclesiastes: 'Vanity of vanities, all is vanity'.

6. Edward Collier c.1642-1708
An Allegory of Wealth and Temporal Power: a vanitas still life of court jewels in a casket, a globe, sword, and a miniature of Charles I, all resting on a cloth-covered table 1705
Oil on canvas
Lent from a private collection
This large vanitas still life is a display of wealth and worldy goods, but also a warning that such pleasures are only temporary.  The open book has the Latin phrase: ‘no one can call himself blessed before death’. Like most painters of still life, Collier had a collection of stock items that he re-used in his paintings.  The ornate golden goblet in the centre of the composition can be seen in his Still life with a Volume of Wither’s ‘Emblemes’ (hanging to the left of this picture) and the globe is repeated in his Still Life (displayed to the right).

7. Edward Collier c.1642-1708
Still Life 1699
Oil on canvas
Tate. Purchased 1948
This still life featuring a globe and a book with a description of the world reminds us of the global trade and exploration that led to the wealth and opulence that can be seen in many still life pictures. This is one of a number of similar compositions by Collier, some near identical but with the addition or subtraction of some items.  It suggests that he is not producing works individually for a specific patron, but is painting speculatively and selling his works via auctions that were held in taverns, coffee houses and commercial exchanges. 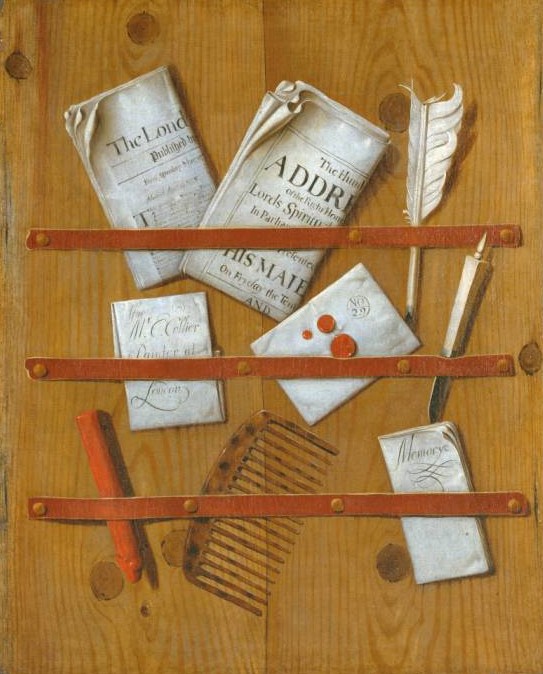 8. Edward Collier c.1642-1708
A Trompe l'Oeil of Newspapers, Letters and Writing Implements on a Wooden Board c.1699
Oil on canvas
Tate. Purchased 1984
T03853
Collier was particularly noted for his trompe l’oeil pictures, painted to demonstrate the artist's ability to create in paint the illusion of real, tangible objects. A letter rack with a newspaper, letter, quill pen, sealing wax and comb was one of Collier's favourite subjects. He painted many variations of it, often using the same objects though arranging them slightly differently.  Although this picture bears no date, a clue is given by the folded London newspaper at the top of the rack which is dated 'Monday, May 15 ...': the most likely Monday to fall on this date was in 1699.

9. Edward Collier c.1642-1708
Trompe l'Oeil with Writing Materials c.1702
Oil on canvas
Lent by the Victoria and Albert Museum, London
X41247
This picture displays objects used in correspondence, including sticks of sealing wax, a sealing stamp and a paper knife.  The quill pen and newspaper are shown in near identical form to the painting displayed to the left, the paper with almost exactly the same creases and curls. There is also a folded news sheet, a copy of the Apollo Anglicanus almanac and a medal representing Charles I. These three items allude to the accession of Queen Anne, which occurred in 1702. The artist has signed the painting by including his name on the letter: ‘for Mr E Collier, Painter at London’.

10. Thomas Warrender fl.1673-1713
Still Life 1708
Oil on canvas
Lent by the Scottish National Gallery, Edinburgh. Purchased 1980
X41509
This trompe l’oeil letter rack is the only known work by the Scottish painter Thomas Warrender.  The composition is very close to the letter rack paintings by Edward Collier, which he must have known.  Warrender infuses his work with coded political references.  The Act of Union between England and Scotland (1707) is symbolised by the overlapping playing cards with the royal coats of arms of each nation.  Scottish Presbyterians subscribed to the National Covenant (shown top centre) and saw the Union as a means of protection against Catholicism and the ‘dangers of Popery’ (top right). 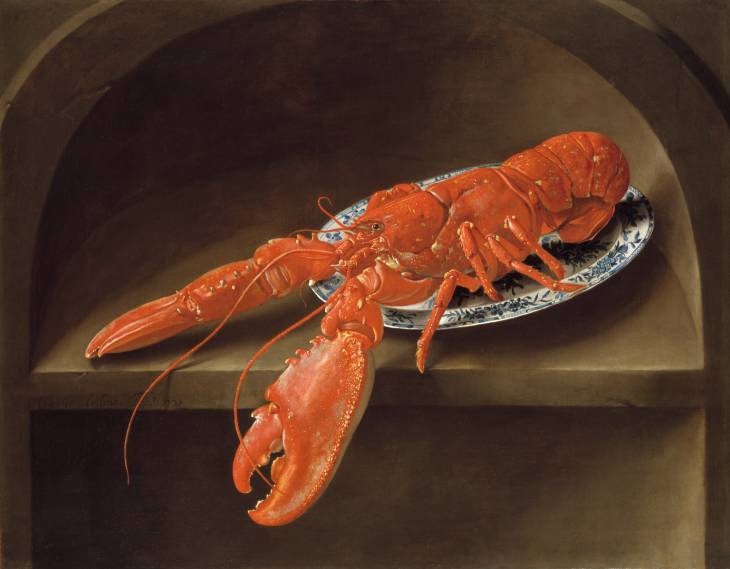 11. Charles Collins c.1680-1744
Lobster on a Delft Dish 1738
Oil on canvas
Tate. Purchased 1981
T03301
The cooked lobster is a recurrent motif of still life paintings of the 17th century.  They are often shown alongside other luxury foods on table settings known as banketjes (‘little banquet pieces’) and feature regularly in paintings by artists such as Willem Kalf (1619-93). This depiction of a cooked lobster on a Delftware dish, resting in an architectural niche, is one of only two known works of this nature produced by the Irish-born artist Charles Collins.  He is better known for his decorative arrangements of birds, often in watercolour.

12. Simon Verelst 1644-c.1710/17
Vase of flowers
Oil on canvas
Lent by the Syndics of the Fitzwilliam Museum, Cambridge
X41501
Simon Verelst moved to London from the Netherlands in 1669 and became the leading flower painter in Britain.  His mastery at realism amazed viewers of his works.  The famous diarist Samuel Pepys noted how he felt drawn to touch one of his paintings to convince himself that the dew drops he saw were not real.  The inclusion of the pocket watch on the ledge by the base of the vase may refer to the ability of the artist to freeze time, and capture the beauty of the flowers for the viewer all year round.

13. Simon Verelst 1644-c.1710/17
A vase of flowers
Oil on canvas
Lent by the Syndics of the Fitzwilliam Museum, Cambridge
X41502
Given the easy availability of flowers today, it is difficult to appreciate the wealth and novelty that certain varieties represented to the seventeenth century viewer of these paintings. Tulips were exotic bulbs from the east introduced in Europe in the mid-sixteenth century and available only to the few.  In the Netherlands in the early seventeenth century ‘tulip mania’ caused the price of a single bulb to soar to as much as a house, and despite the crash in prices in 1637 they remained expensive plants.  Striped varieties, such as those shown here by Verelst, were the most coveted.

14. Jean-Baptiste Monnoyer 1636¬1699
Still life of mixed flowers in a vase on a ledge
Oil on canvas
Lent by the Syndics of the Fitzwilliam Museum, Cambridge
X41503
The French painter Monnoyer settled in Britain in the early 1690s after a successful career in Paris, his works collected in large number by the French king Louis XIV.  He was particularly noted for his large-scale paintings of flowers, which were considered so real that the only thing they lacked was scent.  He was brought to Britain to work for the Duke of Montagu, and continued to be commissioned by aristocrats to produce works for their grand houses. He also painted the flowers in the background of works by the leading portrait painter, Godfrey Kneller.