This display has been devised by Tate Britain curator Tim Batchelor

A familiar genre today, still life painting became established in Britain in the late seventeenth century. Writing in the 1650s, the author William Sanderson referred to such paintings as ‘dead-standing-things’, the term ‘still life’ (from the Dutch ‘stilleven’) only appearing in the following decades. Characterised as the detailed depiction of inanimate objects, the genre had been established in the Netherlands early in the seventeenth century and its introduction into Britain was through the work and influence of Dutch incomer artists.  Pieter van Roestraten arrived in London from Amsterdam in the mid-1660s and became known for his ‘portraits’ of objects, particularly silver; another Dutchman known by the anglicised name of Edward Collier was active in London from the 1690s. 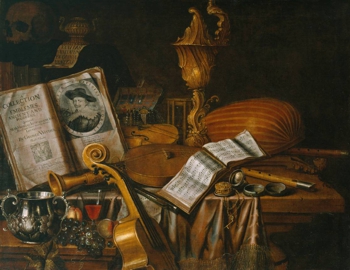 This period saw a shift in the way artists sold their works. The old system of artistic patronage by and commissions from the wealthy elite was, from the later 1680s, augmented by newly-emerging auctions.  Sales at taverns, coffee houses and commercial exchanges provided artists with new opportunities. It also meant the ‘middling’ class of professionals and merchants could purchase art to furnish their homes and satisfy their social ambitions, with affordable and easily available still lifes a popular choice.

More details about the display can be seen on the Tate Britain website at http://www.tate.org.uk/whats-on/tate-britain/display/focus-dead-standing-things-still-life-1660-1740