Ways of reading a translation 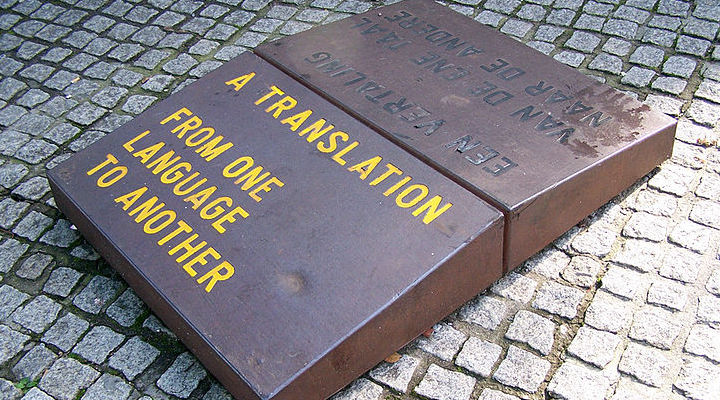 ‘The sounds of a tongue we do not know may cause us to react with astonishment, annoyance, indignation, or amused perplexity, but these sensations are soon replaced by uncertainties about our own language. We become aware that language is not universal; rather, there is a plurality of languages, each one alien and unintelligible to the others. […] Although language is not universal, languages nevertheless form part of a universal society in which, once some difficulties have been overcome, all people can communicate with and understand each other. And they can do so because in any language men always say the same things. Universality of the spirit was the response to the confusion of Babel: many languages, one substance.’

During your time at York, you will often encounter and study texts originally written in languages other than English, which you will access in an English translation. In this respect, York’s English degree is truly unique: our students are not limited to reading and studying Anglophone texts, but rather they are consistently encouraged to read texts from such disparate literary traditions as Chilean, Italian, Japanese, or French.

As Mexican writer Octavio Paz explains in the above excerpt, translation is the solution to the confusion of Babel: it lifts the barriers between cultures and renders foreignness into familiarity, accentuating that sense of the universality of human experience. Your tutors will guide you through the adventure of reading foreign texts, but here are some prompts on how to go about a text which was not originally written in English, and indeed not even originally intended for a foreign audience.

A bilingual edition with parallel text may sound to you like a collector’s curiosity and it may be in some cases more expensive to purchase, but if and when you can, do prefer editions with a parallel text in original.

Look at the form the original text was written in: does it resemble in any way the form of the translation you are reading? Pick any passage and make a line-by-line comparison: can you spot any interesting words in the original language?

If you’re an English native speaker and you’re looking at a text written in a Romance or Germanic language, you should be able to spot some familiar words. Even the famous modernist poet T. S. Eliot made use of parallel-text editions, and he started reading Dante’s Divine Comedy precisely with one of these as a companion:

‘I read Dante only with a prose translation beside the text. Forty years ago I began to puzzle out the Divine Comedy in this way; and when I thought I had grasped the meaning of the passage which especially delighted me, I committed it to memory; so that, for some years, I was able to recite a large part of one canto or another to myself, lying in bed or on a railway journey. Heaven knows what it would have sounded like, had I recited it aloud; but it was by this means that I steeped myself in Dante’s poetry.’
(T. S. Eliot, ‘A Talk on Dante’, The Kenyon Review, vol. 14 no. 2 [1952], p. 178)

Benefits of close-reading a translation

Learning to close-read a translation will improve your close-reading skills in your own language, too. Each time you will be studying a set foreign text at York you will also be recommended to buy a specific edition and so a specific translation, but it is sometimes interesting to look at different translations of the same text to see how much they differ.

Again, even when you do not know the source language, you can make informed observations about the vocabulary, syntax or register used in the various English translations.

A famous example is the Bible: if you look at the various translations of the same passage from the Bible throughout the centuries, you can notice changes in translations which vary according to the time period, translation strategies used, and even ideological or confessional perspectives (ie King James had quite different aims in mind, when wanting the Bible translated, if compared to a contemporary English translation).

The work of the translator

In the past, translators were unfortunately often “forgotten”, or not even formally acknowledged for their work. Today, however, translators’ names are normally well noticeable and visible in the book cover or frontispiece and should always be acknowledged when referencing the edition you are using for your essays. There are also specific prizes and awards for the best translations being published each year in the UK (and around the world), which emphasize the importance of translator’s work. When you are commenting on a specific word choice in English, you should always bear in mind you are reading a translation, which is a product of a translator’s decision, rather than the author’s. In those cases, it is good practice to comment on the translator’s choice, rather than making it appear as if you were assessing the process of author’s composition directly (ie say ‘the translator rendered X as Y…’ rather than ‘Baudelaire uses the word “enthusiasm”, which is interesting because….’). Sometimes translators need to be very creative when translating a certain musicality, rhythm, or complex meaning of the source language (ie Japanese, Spanish, Russian, etc.) into the target language (ie English), which means that they may have to compromise on the formal or semantic equivalence of their translation. Again, being able to double check your text with a parallel text will be extremely useful when close reading a translation; it will enable you to make more precise claims with regard to the use of both source and target languages.