Holly Day and Lilian Tabois are the joint winners of this year's award. 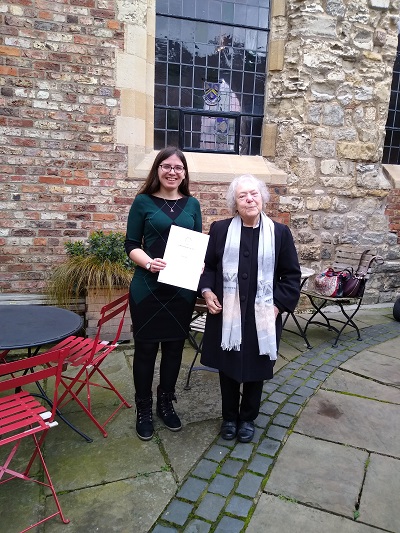 CECS is delighted to report that Holly Day and Lilain Tabois, PhD students in the Department of History and the Department of English and Related Literature at York, have won the Patrick Nuttgens Award for 2020. The Award is presented annually by the York Georgian Society to support doctoral research in the Georgian period.

Lilian Tabois: My thesis explores how British author and traveller Maria Graham (née Dundas, later Lady Callcott, 1785-1842) contributed to the historiography of Brazil and Chile through her published and unpublished writing and illustrations. I will be using the Patrick Nuttgens award to visit the Archive of Sir Augustus and Maria, Lady Callcott at the Bodleian Libraries in Oxford to study Graham’s unpublished writing about Chile. With this research I hope to re-evaluate Graham’s published travel journals and to open up new ways of thinking about her historiographical practices and her identity as an authoritative female British commentator on South America.

Holly Day: My PhD research is on the development of the pocket memorandum book in Georgian Britain, as both a print product and form of life-writing. This popular genre was the self-proclaimed invention of the prominent London publisher Robert Dodsley in 1748, and was a forerunner of the modern filox. As part of my current research into the early publishing history of the genre, I used the Patrick Nuttgens award to visit the East Sussex Record Office in Brighton to study a cache of Dodsley’s memorandum books from 1753-1765. This trip enabled me to study rare examples of memorandum book frontispieces depicting the imagined user, as well as early experimentations in format. When archives re-open I will use the remainder of the award to examine a remarskable span of pocket memorandum books kept by Catherine Wood from 1787-1854, to examine the role such books played across the life-cycle.

Patrick Nuttgens (1930–2004), described by the Oxford DNB as an ‘architect, broadcaster and educationist’, was a well-known and warmly remembered figure, both locally and nationally. He was founding Director of the Institute of Advanced Architectural Studies within the University of York, and successively Secretary, Chairman and President of the York Georgian Society. The Award, named in his honour and first offered in 2008, is the result of a fruitful collaboration between the Society and the University of York. It provides for a grant to be awarded annually to a PhD student researching an aspect of the Georgian period.

Congratulations to Holly and Lilian!