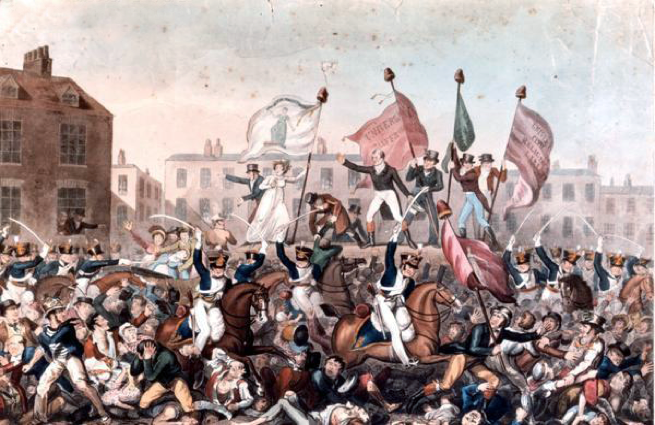 The Thin Ice Press warmly welcomes you to join us at our studio to try your hand at printing your very own 19th century radicalist ballad – “Peterloo”!

Two of the University’s MA students (Ed and Charlotte) will also be giving an informal talk on the significance of the ballad and its relation to the various other events we will be hosting to commemorate the bicentenary of the 1819 massacre at St Peter’s Fields, Manchester.

If you will be joining us at our evening “Beer and Ballads” event please do bring along your replica ephemera (as well as your most raucous singing voice) and ensure it becomes as ale soaked as the originals.

‘Beer & Ballads’ – 7.30pm, Basement at York Picturehouse
Join us at The Basement at City Screen Picturehouse Cinema in York as we recreate the convivial atmosphere of the radical meetings of the early 19th century before and after Peterloo.

Poetry and song were crucial to creating the sense of community that fuelled the protest meeting in St Peter’s Field in Manchester two hundred years ago as recently commemorated by Mike Leigh’s film. A year later in 1820 the accused walked over the Pennines to attend their trials and met in a pub, probably on Skeldersgate.

After a showing of the film at the Picturehouse, we will be recreating the atmosphere of these meetings with music from Alva and with singing by you - the audience!

The meeting is convened by Jon ‘Orator’ Mee of the University of York and starts at 7.30pm.

‘Protest, politics and poetry: Peterloo at 200’ is an academic day conference commemorating the 200th anniversary of the Peterloo Massacre from a variety of perspectives; literary, historical, and in terms of material culture. The conference is intended to discuss the event itself and to contribute to national and regional commemorations of Peterloo in 2019. It forms part of a series of academic and public-facing events to be held at York, including an appearance by Mike Leigh at the Festival of Ideas in June, and will be preceded by a showing of the film Peterloo followed by a 'Beer and Ballads' event on 15 March. There will be opportunities to reflect on the culture of commemoration surrounding the anniversary. Speakers include Mary Fairclough, John Gardner, Caitlin Kitchener, Alison, Morgan, Katrina Navickas, Robert Poole, and Sharon Ruston.

14.50-16.20 Panel three
Caitlin Kitchener ‘“Will you, kind Sir, accept this token of our respect?”: The archaeology of female reformers and radical gender’
John Gardner ‘Bamford and the Bishops’
Alison Morgan 'From Pantomime to Peterloo: 'Hearts of Oak' and the contest for Englishness in Songs of Protest'

Tickets: University of York staff and students are free. All others pay £15 towards catering costs.

Please register for the Thin Ice Press Open Studio, Beer and Ballads and Peterloo at 200 conference via:

These events have been made possible by seed funding from Romantic Bicentennials (#Romantics200), the Institute for the Public Understanding of the Past at York, the Department of English and Related Literature at York and Centre for Eighteenth Century Studies at York.

Admission: Ticketed events, but all welcome.